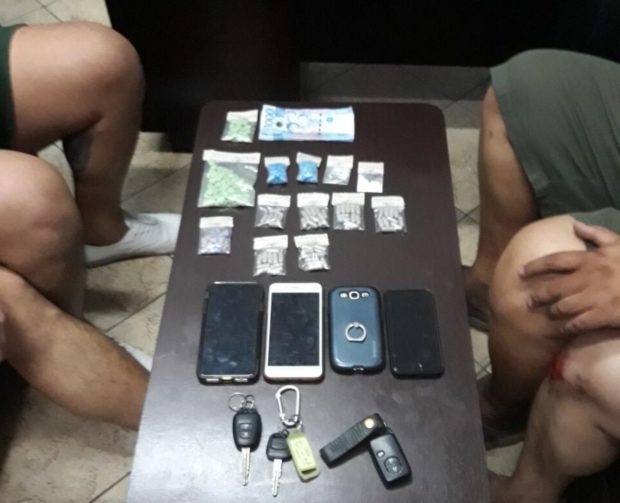 Four suspects arrested in a drug bust in Quezon City sit around alleged ecstasy tablets, cocaine and other evidence seized from them Saturday night, Nov. 25, 2018, in Quezon City. PHOTO COURTESY OF THE MANILA POLICE DISTRICT

According to the MPD, members of its Ermita Police Drug Enforcement Unit conducted the buy-bust at 11:30 pm in front of a convenience store along Katipunan Avenue in Loyola Heights after coordinating with the QC Police District Station 9.

Recovered from the four men were 153 tablets of the “party drug” ecstasy, 2 sachets of suspected cocaine all worth about P350,000, and the buy-bust money, police said.

Following the operation, the lawmen also seized three cars: a Nissan Patrol, a Subaru WRX and a Toyota Vios.

All pieces of evidence from the drug sting have been turned over to the crime laboratory for testing.

The suspects face charges before the QC Prosecutors Office for violating Republic Act 9165 or the Comprehensive Dangerous Drugs Act of 2002. /cbb