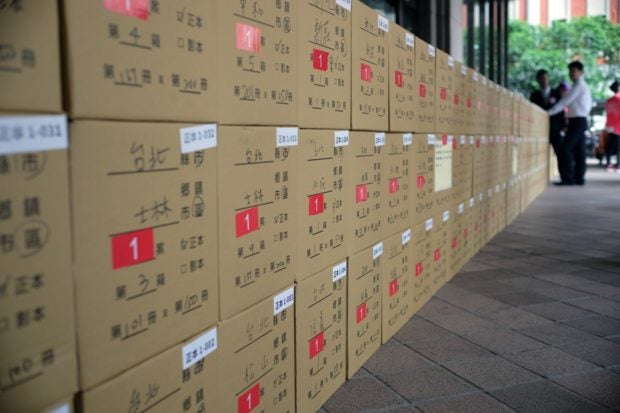 Boxes filled with anti-gay marriage petition signatures are placed in front of Taiwan’s Central Election Commission in Taipei on August 28, 2018. Voters in Taiwan backed anti-gay marriage referendums Saturday, Nov. 24, 2018, in what LGBT activists said was a major blow to the island’s reputation as a rights trailblazer. AFP

TAIPEI, Taiwan – Voters in Taiwan backed anti-gay marriage referendums Saturday in what LGBT activists said was a major blow to the island’s reputation as a rights trailblazer.

The result came at the end of a dramatic evening which saw Taiwan’s President Tsai Ing-wen resign as leader of the ruling Democratic Progressive Party (DPP) after it suffered major defeats in key mid-term polls, a significant blow to her prospects for re-election in 2020.

The Beijing-friendly main opposition Kuomintang (KMT) made gains in the face of China’s increasing pressure on the island.

As well as voting for seats from village to city level, there were 10 referendums on the ballot, including pro- and anti-gay marriage proposals.

A referendum calling for marriage to only be recognized as between a man and a woman in Taiwan’s Civil Code won more than seven million votes, while another calling for same-sex unions to be regulated under a separate law gained over six million.

Gay rights activists had proposed that the Civil Code should give same-sex couples equal marriage rights, but only garnered three million votes.

“Pro-family” group the Coalition for the Happiness of our Next Generation said the win was a “victory of all people who treasure family values”.

Jennifer Lu, a spokeswoman for Marriage Equality Coalition Taiwan, said they were saddened by what she described as the “absurd referendums” and blamed government “incompetence” for allowing the anti-gay marriage votes to go ahead.

Taiwan’s top court legalized same-sex marriage in May 2017, the first place in Asia to do so, and ruled that it must be brought in within two years, but the government has made little progress in the face of opposition from conservative groups.

Although the government has clearly stated that the referendum results will not impact the court’s original decision to legalise gay marriage, LGBT campaigners worry that their newly won rights will be weakened.

With the conservative vote passing the threshold of 25 percent of eligible electors, under referendum law the government must take steps to reflect the result.

Tsai and the DPP have faced a mounting backlash over domestic reforms as well as concerns about deteriorating ties with China, which still sees self-ruling Taiwan as part of its territory to be reunified.

Tsai told reporters that she would take “complete responsibility” for the defeat as she resigned as chair of the party.

The KMT, which oversaw an unprecedented thaw with Beijing before Tsai took office in 2016, declared victory in 15 of 22 city and county seats, up from just six going into the election.

The DPP, which had 13 seats, won only six and lost its traditional stronghold in Kaohsiung city for the first time in 20 years.

The Taipei mayoral seat is still to be announced.

Beijing has intensified pressure on Taiwan under Tsai, upping military drills, poaching diplomatic allies and successfully convincing international businesses to list the island as part of China on their websites.

The DPP is traditionally pro-independence and Tsai has refused to acknowledge Beijing’s stance that Taiwan is part of “one China”, unlike her KMT predecessor Ma Ying-jeou.

When asked about the election, a spokesman for Beijing’s Taiwan Affairs Office said the results reflected “the strong will of the public in Taiwan in sharing the benefits of… peaceful development across the Taiwan Strait”, the official Xinhua news agency reported on Sunday.

Ahead of the vote, Tsai and DPP officials repeatedly accused China of meddling in the lead-up to the elections by operating a “fake news” campaign. Beijing has denied the allegations.

Taiwan’s Investigation Bureau also said it is probing Chinese influence on the elections through campaign funding of candidates.

The KMT — which lost the leadership and its majority in parliament two years ago as the public feared it had moved too close to Beijing — framed the election as a vote of no confidence in Tsai ahead of the vote, vowing to boost the economy and promote peaceful relations with China.

Some analysts said the defeat ruled Tsai out as a candidate for the presidency in 2020.

But others said she may still run, in the absence of an obvious successor.

Observers put the results down to anger over pension cuts and labor reforms, including slashing the number of public holidays, as well as concern that tensions with Beijing are damaging local business.

A referendum proposing to change the name under which Taiwan competes at international sports events that has already angered China was defeated by 5.5 million votes, with 4.6 million in favor. /cbb