Slain ‘doc to the barrios’ remembered for sacrifices 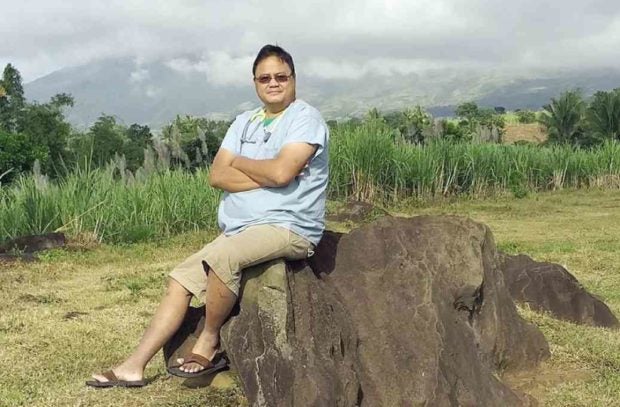 BELOVED Dr. Avelex Amor (above) once borrowed P700,000 from a bank so he could buy medicines for his indigent patients at Canlaon District Hospital.

CANLAON CITY, Negros Oriental — A pall of gloom hangs over the district hospital here, days after a beloved, selfless physician was shot dead by one of three men on a motorcycle.

The motive for the killing has not been determined. The killers are still on the loose.

“We are in mourning. It’s so difficult to even go about our daily tasks because all we think about is what happened to our Dr. Avelex Amor,” a staff member, who asked not to be named, told the Inquirer, a black ribbon pinned on her shirt.

Her grief is shared by many in this city’s Canlaon District Hospital, where Amor served as its director until Nov. 20, when a hail of bullets cut him down in Guihulngan City.

“About three-fourths of the hospital staff are wearing black ribbons. We grieve the loss of our doctor who did a lot of good in the short time he spent with us,” another staff member said.

On the morning of that tragic day, Amor was driving to his home in Dumaguete City when he stopped at a deserted portion of the highway at Barangay Basak in Guihulngan City and alighted.

The killer pumped in four .45-caliber bullets in the physician’s body and escaped with his companions. The suspects had been trailing him from Canlaon, police said.

Investigators said the victim had P20 in his pocket and a debt of P30,000 at the local pharmacy for medicines which, according to his coworkers, all went to his patients.

Before he died, the 43-year-old Amor received threats. But he shrugged them off, aware that these were part of the job.

He knew he was in for trouble as early as Aug. 6, when he was appointed chief of the district hospital.

This was a dreaded assignment. Four other directors who came before him were replaced one after the other after reportedly having a disagreement with an employee who is said to enjoy strong political connections.

“Kami tanan, labi na gyud ang mga job order, giingnan nga ang among mga trabaho gadepender ra sa tumoy sa ballpen (All of us, especially the job order employees, were told that our tenure depends on the tip of the pen),” said another staff member, referring to the signature that appears in everyone’s appointment papers.

One of the first things Amor did when he assumed office was to require that all transactions in the hospital, especially at nighttime when the cashier had already gone home, be recorded in a logbook.

This resulted in an increase in the hospital income by P40,000 in just two weeks.

After a six-day stint as chief of hospital, Amor was inexplicably replaced by his subordinate, Dr. Florencio Juplo II.

But Amor, despite calls from his family to return to Dumaguete, stayed on in Canlaon’s hospital.

“He would spend his own money to buy medicines at a nearby pharmacy so that his patients would get well,” one staff member said.

Amor found joy serving people who could not afford the services of a medical doctor, according to his coworkers.

In debt for patients’ sake

“You should not use your job as a doctor to get rich,” he would lightheartedly admonish his fellow physicians.

He walked the talk.

From his early years in the profession, Amor shunned the temptations of a comfortable life as a physician in a city hospital to live among the poor patients in Siquijor province and in the municipalities of Dauin, Sta. Catalina, Bindoy and finally in Canlaon City, Negros Oriental.

“He cared for everyone. After he made his rounds, he would talk to the staff and ask them how we were doing,” another staff member recalled.

“He was a real ‘Doctor to the Barrios,’” said his mother Boots, as she recalled how her son once got a P700,000 bank loan so he could buy medicines for his patients.

Amor’s uncle, Adlai, said that because Amor always needed money to help his patients, they all decided to give him the dormitory in Dumaguete that they inherited from their grandparents so he could accept lodgers and augment his income.

The kindly physician also took to selling herbal products as a sideline.

When Amor was reinstated as director of the district hospital in September, he immediately worked to unite all employees.

But while his personal touch endeared him to the people he served, he was also firm as hospital chief, refusing, for instance, to sign tampered daily time records.

After some workers took pay cuts for faulty time records, Amor was attacked on social media. Then the threats started coming in.

“He told us he was getting threats, but he wasn’t the least worried about it. ‘If I get killed, just make sure you get justice for me,’” Adlai recalled his nephew telling his family.

Even his staff expressed concern for his safety. “Just leave. Go home where you’ll be safe,” they told their boss.

On the day Amor was gunned down, Juplo resigned and went home to La Castellana town in Negros Occidental.

Left with no medical doctor,  Canlaon District Hospital was forced to send patients to other hospitals until Nov. 22, when the Provincial Health Office assigned two doctors to take over from Amor and Juplo.

“Despite the threats, he chose to serve and die for the people. It was a worthy death,” Alexander said.

The barrio doctor’s remains will be interred at Dumaguete Memorial Park on Monday. A committal service at Silliman University Church will precede the protest funeral at 1 p.m.