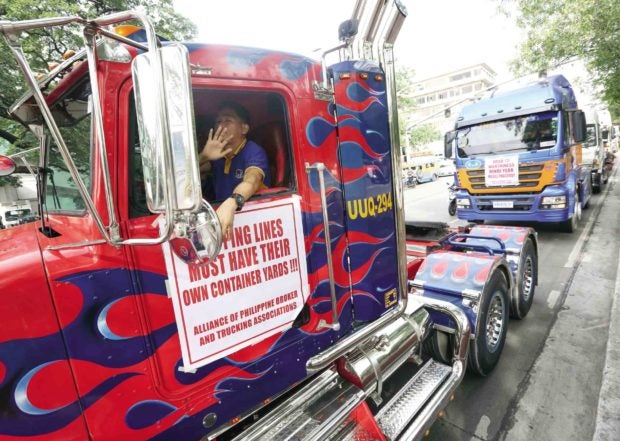 TRUCK RALLY At least 30 truckers take part in a caravan on Road 10 leading to the port of Manila to protest a government plan to phase out aging cargo trucks. President Duterte estimated that truck trips to and from major ports would be reduced to 140,000 a year as a result of the Cavite Gateway Terminal, which he opened on Thursday. PHILIPPINE DAILY INQUIRER / MARIANNE BERMUDEZ

President Rodrigo Duterte on Thursday opened the country’s first container barge port, which he said would reduce the number of cargo truck trips in Metro Manila and suburban areas to just 140,000 a year.

The President also ordered the Department of Transportation (DOT) and other transport agencies to facilitate the safe and speedy transfer of cargo and thwart threats to shipping.

The President gave the order on Thursday at the inauguration of the Cavite Gateway Terminal (CGT) in Tanza, Cavite.

“The efficient transport of cargo and goods to and from our ports is an important element in the supply chain,” the President said in a prepared speech.

“However, we have always been confronted by the perennial problem of port and road congestion,” the President said.

“This terminal is an effort to address this problem,” he added.

The project was a collaboration between the DOTr and International Container Terminal Services Inc. (ICTSI), a leading port operator in the country.

The P1.5-billion container barge port was developed by ICTSI and can accommodate 115,000 twenty-foot equivalent units of containerized cargo.

It will facilitate the sea transport of containers from Cavite to major ports in Luzon.

“This will not only decongest our roads, but also address the long queue of trucks in the Port of Manila,” the President said.

“To ensure the safety of cargoes and to prevent any incident at sea, I am directing the DOTr, this is yours, Art, and the Philippine Ports Authority to ensure the strict enforcement of existing rules and regulations in the operation of this facility,” he said.

The President was referring to Transportation Secretary Arthur Tugade.

“I assure everyone that in line with our Build, Build, Build program this administration will continue to pursue the timely implementation of crucial projects that will uplift the lives of our countrymen,” he added.