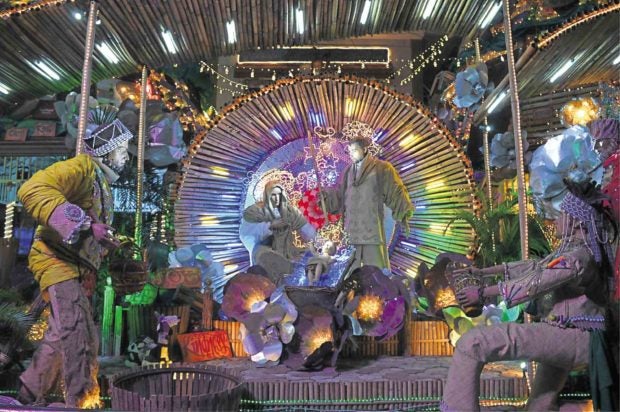 BIRTHOF CHRIST Tarlac province has become a popular destination during the Christmas season for its Belenismo, when local governments and establishments put up colorful versions of the
Nativity scene to depict the birth of Jesus Christ. This display in Moncada town has been drawing tourists and motorists. —MARIA ADELAIDA CALAYAG

CONCEPCION, Tarlace — For two months, a municipal officer and volunteers created life-size papier-mâché figures of the Holy Family that would be displayed in a Nativity tableau at the plaza of Concepcion town in Tarlac province.

When the diorama finally unfolded on Nov. 5, it showed Joseph leading a carabao that was pulling a sled carrying Mary and baby Jesus.

“Our ‘belen’ (Nativity scene) reflects the history and tradition of our town,” said Medic Mercado, assistant tourism officer of Concepcion. “It shows the migration of Kapampangans from neighboring Pampanga [province] who brought along their carabaos.”

The belen is one of the 52 Nativity scenes participating in this year’s Belenismo, a belen-making competition that has become one of the most-awaited events in Tarlac during the Christmas season. 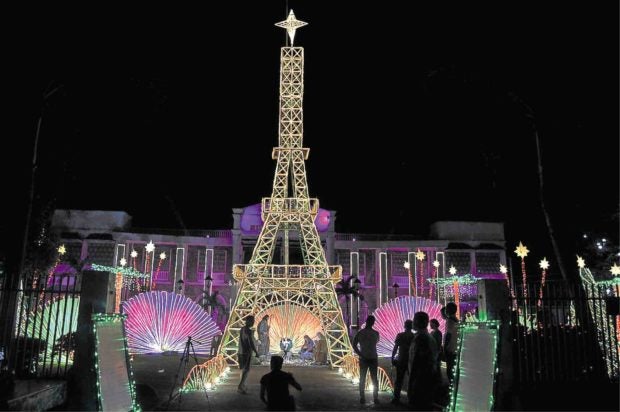 Bamboo is used to build a mini replica of Paris’ Eiffel Tower for the Nativity display of Capas town.

The scenes light up town halls, plazas, churches, business establishments and communities along Manila North Road and Romulo Highway in the western part of the province, offering night travelers a visual treat.

“People come as early as November, during the ‘Undas’ (All Saints’ Day and All Souls’ Day) holidays, as they travel to Metro Manila. They stop by because we always open [the light displays] after Undas and we bring them down after the Feast of the Three Kings [in January],” said Dr. Isa Suntay, cofounder of Tarlac Heritage Foundation, which initiated the project in 2007.

The Nativity scenes are made up of recycled and local materials, and are competing in the community, church, monumental, grand municipal and grand nonmunicipal categories.

In Moncada, four gazebos in front of the municipal hall have been converted into huge Christmas trees flanking the manger. The trees are decorated with discarded motorcycles, television sets and computers, tires, bottles, broken chairs, umbrellas, guitars, placards, wall clocks and other scraps.

The diorama is also composed of large flowers, surrounded by bamboo plants and some wine barrels. The three kings are images of Asian-Indian, Chinese and Middle Eastern men. A carabao, made of old rags, is posed as if watching over the Holy Family. 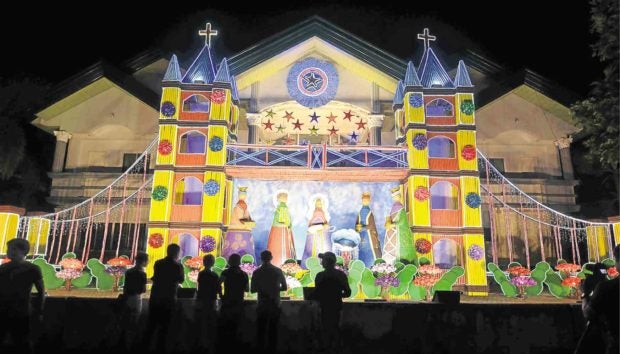 Neighboring Anao has a belen, which was smaller than what it had in previous years, to compete in the community category. But the scene is shaped like an ylang-ylang flower, which made the town famous, said Eduardo Butardo, council member of Barangay San Francisco.

SM Tarlac’s entry, which is competing in the grand nonmunicipal category, sits on a backdrop of stained glass. Discarded stained glass windows coming from different churches in Luzon completed the 6-meter multicolor panels.

The diorama’s platform has more than 3,000 green glass bottles to induce a lighting illusion. Its base is covered with green plastic bottles coming from the mall’s trash-to-cash recycling program.

For its entry in the monumental category, the Tarlac Electric Cooperative in Gerona town built a belen inside a huge Christmas ball. Baby Jesus is laid on a cart made out of a transformer box, and covered with corn cobs.

Peanut sacks cover the whole stage, which is also surrounded by six Christmas trees made of scrap materials. 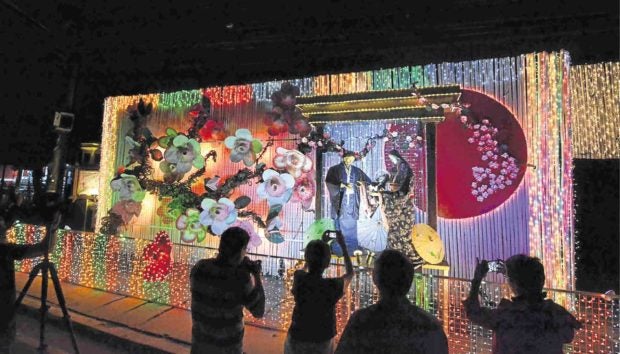 While most of the Nativity scenes depict localized characters, the Capas belen has a foreign touch, with the manger nestled under a 13-meter tower that looks like the Paris landmark. The tower, which is made of bamboo, is adorned by a star at its peak.

Jesus Dizon, 45, the town’s belen designer since 2007, said he used to build Bible-themed Nativity scenes in the past.

This time, he said he had to give in to what people wanted to see.

“They want a modern belen. They’ve been telling me that by seeing the Eiffel Tower, it is as if I brought Paris nearer to them,” Dizon said.