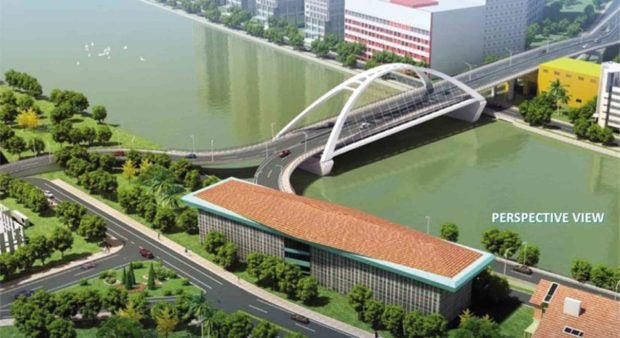 BRIDGING THE GAP An artist’s rendition of the bridge to be funded by China that will span Pasig River. —CHINA PLUS

Malacañang will not allow the construction of a China-funded bridge project spanning the Pasig River to cause the delisting of the centuries-old San Agustin Church in Intramuros, Manila, from the World Heritage Sites.

Presidential spokesperson Salvador Panelo made this assurance amid warnings that the construction of the Binondo-Intramuros bridge might cause four baroque churches in the country to be removed from the list.

“Oh, definitely, because that is a world heritage site. That is part of our history,” said Panelo, when asked if the Palace would not allow the delisting of the four baroque churches.

This is because the construction of the bridge might encroach on the buffer zone prescribed for the San Agustin Church in Intramuros, which was built in 1720.

The United Nations Educational, Scientific and Cultural Organization (Unesco) earlier warned that the construction of the Binondo-Intramuros bridge might cause the delisting of the San Agustin Church and three other old churches from the Unesco list.

The proposed bridge will connect San Fernando Street in Binondo to Solana Street and Riverside Drive in Intramuros.

The other churches, which run the risk of being delisted, are the Church of La Nuestra Señora de la Asuncion in Santa Maria, Ilocos Sur; the Church of Saint Augustine in Paoay, Ilocos Norte; and the Church of Santo Tomas de Villanueva in Miag-ao, Iloilo.

The four churches were declared a Unesco World Heritage Site in 1993 and are collectively described as the “Baroque Churches of the Philippines.”

Panelo said the contractor of the modern Binondo-Intramuros span had made assurances that the bridge would not intrude into the buffer zone prescribed for the San Agustin Church.

“So we do not know exactly whether or not it will. Because if it will, then certainly it is right to object,” he said.

Asked if Malacañang would no longer push through with the project if it encroached on the buffer zone for the Intramuros church, Panelo said the location of the bridge might be adjusted if needed.

“Not necessarily not push through, because you may move the location to maybe 100 meters away. I don’t think that will be a problem,” he said.

Read Next
2 suspected pushers die in shootout with QC police
LATEST STORIES
After winning title, time for LA Tenorio to give back to Batangas folk
‘Mia’: Rom-com with a cause a career-boosting showcase for Coleen Garcia
No.13 lucky for Orlando Bloom
The ties that bind: Why the guys of Black Eyed Peas prefer to stay together
How Yam handles flirtatious guys
MOST READ
Nadine Lustre’s phone stolen in Brazil
Will you be the first P16 Billion Powerball jackpot winner from the Philippines?
Gretchen Barretto’s daughter Dominique graduates magna cum laude from California college
Ginebra beats Meralco again to capture PBA Governors’ Cup title
Don't miss out on the latest news and information.