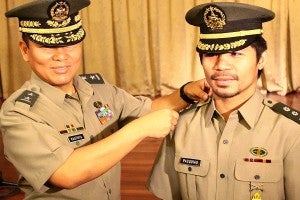 Major General Emmanuel Bautista, Commanding General of the Philippine Army, dons the rank of Lieutenant Colonel on Manny Pacquiao in a ceremony held on Monday at the Philippine Army Headquarters in Fort Bonifacio. Photo by Matikas Santos

“Today, I stand tall with pride and honor for the recognition that the command has accorded me. And I cannot do less but commit to the ideals and core values of the PA,” Pacquiao said in his response speech.

Major General Emmanuel Bautista, Commanding General of the PA, led the formal donning of ranks ceremony in the PA Headquarters with Brigadier General Alex Albano, army reserve commander of the Armed Forces of the Philippines.

Bautista said in a statement that Paquiao and the reserve force “are indispensable stakeholders in our campaign to win the peace through the implementation and execution of our Internal Peace and Security Plan (IPSP) Bayanihan”.

Pacquiao defended his appointment as lieutenant colonel by saying that his election as representative of Saranggani made him eligible for the promotion.

“Despite that knowledge, I did not seek it out until I was told after the Mosley fight that I was being considered for commissionship as lieutenant colonel. Fairly, I was not promoted because I was an enlisted staff,” Pacquiao said.

PA Spokesperson Major Harold Cabunoc said “his commissionship was based on the provisions of Section 44 of Republic Act 7077 which provides that ‘elected officials and presidential appointees may be commissioned into the Reserve Force subject to the existing AFP rules and regulations’.”

Pacquiao earned the rank of Lieutenant Colonel in September 21, 2011. He previously held the position of Senior Master Sergeant and was designated as Command Sergeant Major of the 15th Ready Reserve Division.

Pacquiao first entered the Army’s reserve force in April 27, 2006 as a sergeant. He later rose to technical sergeant in December 1 of the same year.

On October 7 of the following year, he became a master sergeant, the highest rank in the enlisted personnel.

Two years later, on May 4, 2009, he was given the special rank of senior master sergeant in honor of his accomplishment as number one pound-for-pound boxer in the world.

In the same year, Pacquiao was also given an honorary doctorate degree in humanities by the Southwestern University of Cebu City.

“He can also help in the recruitment of patriotic Filipinos to join the PA Reserve Force as we endeavor to build the force into one great component of a world-class Army that is a source of national pride,” Bautista added.

“To the PA leadership, I promise to continue to win my few more fights and bring honor to our country. Should you need legislative support, my congressional office will be there to help you. As your officer, I am always at your service,” Pacquiao said.