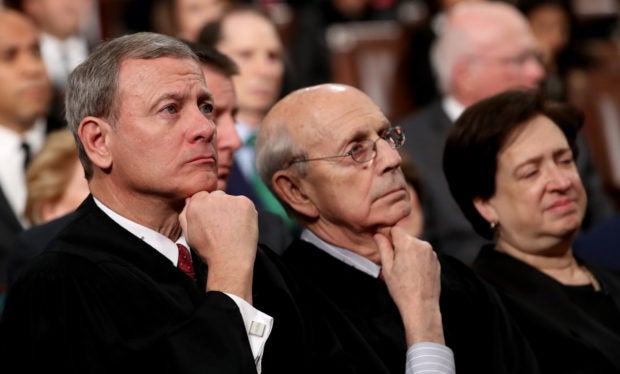 WASHINGTON, United States – US Supreme Court Chief Justice John Roberts issued an extraordinary rebuke of Donald Trump on Wednesday after the president criticized a ruling he said was handed down by an “Obama judge.”

“We do not have Obama judges or Trump judges, Bush judges or Clinton judges,” Roberts said in a statement to the Associated Press.

“What we have is an extraordinary group of dedicated judges doing their level best to do equal right to those appearing before them,” Roberts said.

“That independent judiciary is something we should all be thankful for,” the chief justice added in the brief statement released on the eve of the Thanksgiving holiday.

Roberts’ remarks were a rare public criticism of a sitting president by a Supreme Court chief justice.

The statement came one day after Trump criticized a federal judge who temporarily blocked the administration from denying asylum to people who enter the country illegally.

Trump issued a proclamation earlier this month saying that only people who enter the United States at official checkpoints — as opposed to sneaking across the border — can apply for asylum.

But US District Judge Jon Tigar in San Francisco issued a temporary restraining order against the Trump move.

Trump lashed out at the ruling on Tuesday, calling it a “disgrace.”

“This was an Obama judge, and I’ll tell you what, this is not going to happen anymore,” Trump said. “People should not be allowed to immediately run to this very friendly circuit and file their case.”

Trump has repeatedly attacked the judiciary when cases have gone against him but this was the first time that Roberts, who was appointed to the court by President George W. Bush, has responded to his criticisms. /cbb