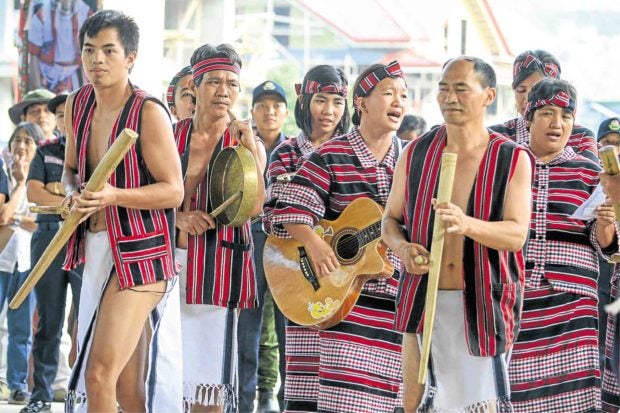 SENSE OF COMMUNITY Indigenous peoples of Benguet province value kinship and community so they treat elections as friendly contests, leaving no place for violence and sore losers. —KARLSTON LAPNITEN

LA TRINIDAD, Benguet — Full commitment to “inayan,” an approximation of the concept of “karma,” where one’s actions dictate one’s destiny, has kept elections peaceful in this Cordillera province.

“In my more than 30 years as a public servant, I have not heard of Benguet politicians physically harming another,” Gov. Crescensio Pacalso said.

Benguet Ibaloy, Kankanaey, I’wak, Karao and Kalanguya share the practice of inayan, which is tied to their ancestral devotion to Kabunian, the unseen divine creator, according to Ibaloy elder Camilo Alumit, a former community affairs officer of the provincial government.

Inayan has also kept political posts uncontested or has ensured the continued service of elected officials chosen by elders.

In Kapangan town, for instance, people vote for their mayors to complete their terms, according to Roberto Canuto, a provincial board member.

Canuto, who was Kapangan mayor from 2009 to 2016, ran uncontested for his second term.

Lawyer Elenita Julia Tabangin-Capuyan, election supervisor in Benguet, said the province had not had any election-related violence.

“There is still a great deal of respect between political rivals. In fact, they shake hands and share the same table after elections,” she said.

She said the only electoral protest she encountered took place in Buguias town in 2004 when mayoral candidate Thomas Palileng sought to disqualify his rival, Nardo Cayat, a former priest.

The Commission on Elections disqualified Cayat 23 days before the elections but he won over Palileng by a huge margin and was able to sit briefly as mayor before relinquishing the office to Palileng.

Elders may intervene and persuade politicians to either proceed or withdraw from running, he said.

“Politicians who defy the elders’ decision have slim chances of winning,” he said.

In Benguet, it is common to see rival politicians campaigning together on the same stage in every venue.

Benguet’s deep sense of kinship due to intermarriages may also be a factor for the peaceful elections, said Board Member Juan Nazarro.

“Even if they are distantly related, politicians prefer to hold kinship above political interest,” he said.

“Election is a friendly competition for us here, not something worth destroying your relationships.” —Karlston Lapniten