Wrong placement of China’s flag in Xi’s state visit a breach of protocol? |

Wrong placement of China’s flag in Xi’s state visit a breach of protocol? 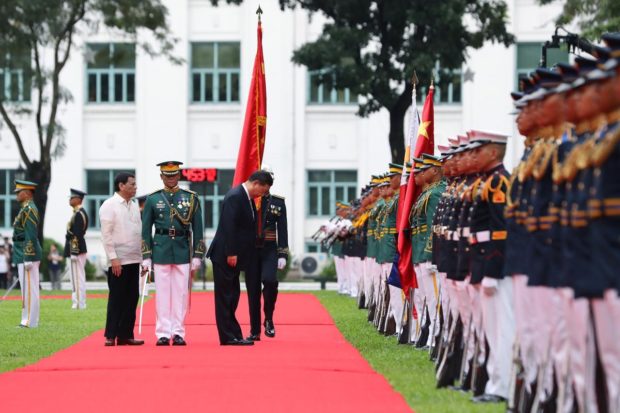 Protocols regarding the proper positioning and usage of the Philippine national flag and the Presidential flag were allegedly breached during Chinese President Xi Jinping’s visit in Malacañang on Tuesday.

This was pointed out by some netizens, including Eufemio Agbayani III, who in his Twitter account said the Chinese flag was wrongly placed on the left side when it should have been on the right side as mandated by Republic Act 8491 or “The Code of the National Flag, Anthem, Motto, Coat-of-Arms and Other Heraldic Items and Devices of the Philippines.”

BREACH OF PROTOCOL. Why is it that in the arrangement of flags this #XiJinpingPH state visit, the organizers got the PH and CH flags reversed? (a thread) (1/9)

The alleged wrong arrangement of the flags were spotted at the gates of Malacañang and also during the bilateral meeting of Xi and President Rodrigo Duterte.

Other netizens also noticed that instead of the Presidential Standard or the flag of the President of the Republic of the Philippines, the honor guard tailing the two leaders during the welcome ceremony in Malacañang carried the Chinese flag. They even posted photos of previous state visits of state leaders to point out the difference.

The honor guard is carrying the flag of China and not the presidential standard. Change in protocol, sir? @mlq3 pic.twitter.com/QplBGwTkV5

Even former Presidential Communications Undersecretary Manuel Quezon III noticed the strange usage of the flags. He said, however, Presidents can break “tradition” even if they are expected to maintain it.

Presidents, of course, while expected to maintain tradition, can always break with tradition. It can be a dramatic statement with deep meaning, without having to say anything. In that sense 2018 is a year that marks discarding a tradition dating back to 1935. pic.twitter.com/eCIvNl6lwQ

Under Section 18 of RA 8491, the Philippine flag should always be displayed on the left side, or the observer’s point of view, when it is with a row of foreign flags.

When hoisted in a parade with house flags, the law says the Philippine flag “shall be in front of the center of the first line” while the “house flags should be arranged in alphabetical order, by precedence or by protocol order from left to right (the observer’s point of view).”

Malacañang has yet to explain or give comment on the matter, as of this posting. /kga