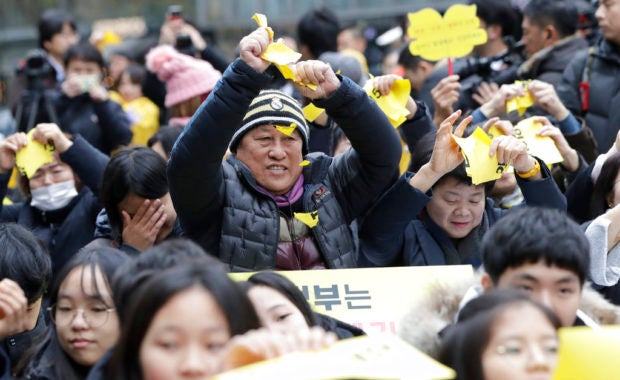 Participants tear papers reading “Reconciliation and Healing Foundation” and “2015 agreement between South Korea and Japan” during a weekly rally against Japanese government near the Japanese Embassy in Seoul, South Korea on Nov. 21, 2018.  AP

The widely expected decision, if carried out, would effectively kill a controversial 2015 agreement to settle a decades-long impasse over the sexual slavery issue and threatens to aggravate a bitter diplomatic feud between the Asian U.S. allies over history. Many in South Korea believed the Seoul government settled for far too less in the sex slave deal and that Japan still hasn’t acknowledged legal responsibility for atrocities during its colonial occupation of the Korean Peninsula from 1910 to 1945.

Japanese Foreign Minister Taro Kono sharply criticized South Korea’s decision to shut down the foundation, saying that Seoul would violate the “most basic rule to live in the international society” by walking back on the deal. Japanese Vice Foreign Minister Takeo Akiba summoned South Korean Ambassador to Japan Lee Su-hoon to the ministry to lodge a protest.

Seoul’s Ministry of Gender Equality and Family said it will take legal steps to dissolve the foundation, a process ministry officials said could take months. Lee Nam-hoon, an official from the gender equality ministry, said Seoul’s Foreign Ministry plans to consult with Tokyo on what to do with the 1 billion yen ($8.8 million) Japan funded to the foundation that was formally launched in July 2016.

“After considering diverse opinions over the ‘Reconciliation and Healing Foundation’ based on victim-centric principles, we have decided to push for the dissolution of the foundation,” Gender Equality Minister Jin Sun Mee said in a statement. She said the ministry will continue to push policies to “restore the honor and dignity” of the sexual slavery victims.

The decision was welcomed by hundreds of protesters gathered in Seoul for a weekly rally denouncing sexual slavery by Japan’s wartime military. Organizers played a recorded message by a hospitalized 92-year-old victim, Kim Bok-dong, who said she was happy that the foundation was getting dissolved but also demanded a proper apology and compensation from Tokyo.

“We won, (but) it’s just the start,” said Yoon Meehyang, who heads an activist group representing South Korean sexual slavery victims. “In saying that we won, we mean that we turned back history to the day before Dec. 28, 2015. We will invest all our passion to write a new history of justice while the victims still have time and overcome past three years that were lost.”

Historians say tens of thousands of women from around Asia, many of them Korean, were sent to front-line military brothels to provide sex to Japanese soldiers.

Liberal South Korean President Moon Jae-in, who has been a harsh critic of the 2015 deal reached under his conservative predecessor, told Japanese Prime Minister Shinzo Abe during a meeting in September that the foundation was failing to function properly because of strong opposition by the victims and public. A South Korean government panel in December last year concluded the deal as seriously flawed because Seoul’s previous conservative government failed to properly communicate with the victims before reaching the deal.

South Korea and Japan are already at odds over a ruling by Seoul’s Supreme Court last month that a major Japanese steelmaker should compensate four South Koreans for forced labor during Japan’s colonial rule of the Korean Peninsula before the end of World War II. Abe said Tokyo will respond “resolutely” to the ruling, which he described as a violation of a 1965 treaty between Seoul and Tokyo that restored diplomatic ties and was accompanied by more than $800 million in economic aid and loans from Tokyo to Seoul.

Seoul and Tokyo’s bitter disputes over history have complicated Washington’s efforts to strengthen trilateral cooperation to deal with North Korea’s nuclear threat and China’s growing influence in the region.

At the time of the sex slave deal, Seoul said there were 46 surviving South Korean victims. But 19 of them since died. Twelve victims who rejected payment from the foundation sued the Seoul government over the deal in August 2016, saying it didn’t go far enough to establish Japan’s responsibility.

Lee, the ministry official, said the foundation had used 4.4 billion won ($3.8 million) in cash payments to 34 victims who were alive at the time of the 2015 deal and to relatives of 58 victims who were dead by then. Only 27 of around 240 South Korean women who registered with the government as victims of Japan’s wartime sexual slavery are currently alive, Lee said.

Under the 2015 agreement, which was then described by both governments as “irreversible,” Japan pledged to fund the foundation to help support the victims. However, Japan said it didn’t consider the 1 billion yen it provided to the fund as compensation, saying such issues were settled in a 1965 treaty. South Korea, in exchange, vowed to refrain from criticizing Japan over the issue and will try to resolve a Japanese grievance over a statue of a girl representing victims of sexual slavery that sits in front of the Japanese Embassy in downtown Seoul. /ee