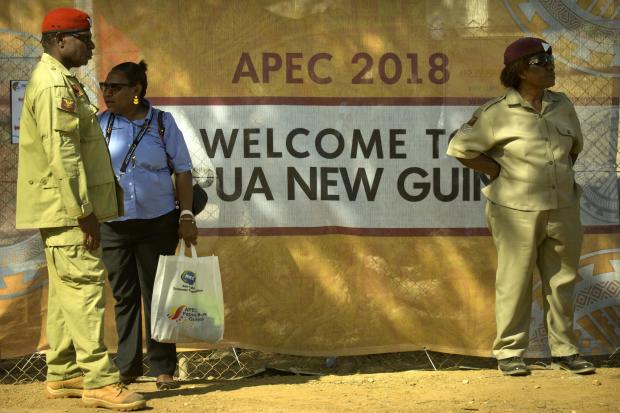 Security officials stand outside a perimeter fence for a secured area ahead of the Apec Economic Leaders’ Week Summit in Port Moresby, Papua New Guinea, Wednesday, Nov. 14, 2018. After three decades of promoting free trade as a panacea to poverty, the Apec grouping of nations that includes the U.S. and China is holding its lavish annual leaders meeting in the country that can least afford it. (Photo by MARK SCHIEFELBEIN / AP)

The impoverished Pacific nation had rolled out the red carpet for visiting world leaders during the two-day conference, and even bought 40 Maseratis to ferry dignitaries around.

“A group of policemen and soldiers are outside the parliament and demanding their APEC allowances,” PNG police spokesman Dominic Kakas told AFP. He said that other police were “dealing with it”.

No one was known to be hurt, Kakas said, adding he did not yet know how many police and soldiers were involved in the incident in the nation’s capital Port Moresby.

A witness outside parliament told AFP “hundreds of police and troops” were standing on the front steps of parliament protesting they had not been paid a special APEC allowance of 350 kina (US$104).

“The scene outside parliament is very tense. There are dozens of police cars and army vehicles,” the witness said, adding that a nearby hotel was in lockdown and protesters were blocking traffic.

Some locals in PNG, the poorest member of APEC, had expressed anger with the government’s lavish expense for the summit, which came at a time when the developing nation of eight million people is battling a polio outbreak and resurgence of malaria, while struggling to pay its teachers.  /kga