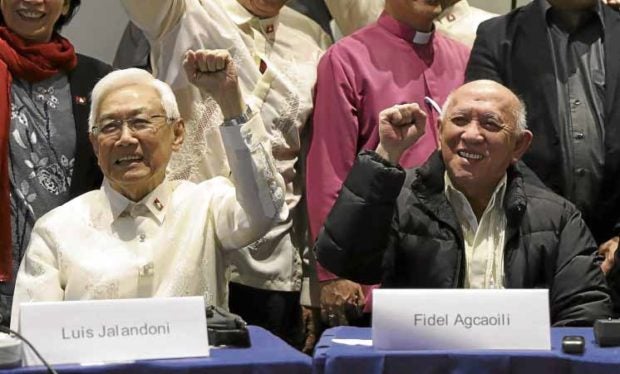 NO HOMECOMING Luis Jalandoni (left) and Fidel Agcaoli, leaders of the National Democratic Front of the Philippines, have aborted plans of coming home to the Philippines, saying that without a meeting with President Duterte, it would be fruitless to talk with his representatives. —AP

A team from the communist-led National Democratic Front of the Philippines (NDFP) based in the Netherlands has dropped plans to return home to Manila to work for the possible resumption of peace talks with the government.

“I’m not going there (Philippines) anymore,” Fidel Agcaoili, chair of the NDFP negotiating panel, said in an online interview from the Netherlands on Monday morning.

Agcaoili made the statement even when he was reminded that the government was already preparing for an “informal meeting” this week between the NDFP and Presidential Peace Adviser Jesus Dureza and presidential spokesperson Salvador Panelo as ordered by President Rodrigo Duterte.

Earlier, Jose Maria Sison, Communist Party of the Philippines (CPP) founder, told the Inquirer that Agcaoili had received a “latest advice” from Labor Secretary Silvestre Bello III, head of the government peace panel, not to proceed with the plan of returning to the country.

“It was only today that Fidel was told not to go home. Latest advice from Bebot Bello,” Sison said in a separate online interview.

Agcaoili confirmed Sison’s information, but when asked about details of his telephone conversation with Bello, the NDFP leader said: “Only that the appointment with the President (Duterte) has been canceled and that it would be fruitless if we were to talk with each other without new perspective.”

Efforts to reach Bello through his mobile phone failed. He did not reply to a text message seeking his comment.

The NDFP is the political arm of the CPP, which has been waging war in the countryside for almost 50 years.

Interior Secretary Eduardo Año had earlier threatened Agcaoili and Luis Jalandoni, former NDFP head and now serving as senior adviser to the NDFP peace negotiation panel, with arrest upon their arrival in the country.

Año said the two had warrants of arrest in Quezon province for criminal charges that he did not specify.

Last week, the NDFP announced that Agcaoili, Jalandoni and Coni Ledesma, Jalandoni’s spouse and a member of the NDFP peace panel, would return to the country this month.

They were supposed to come in connection with their work as members of the NDFP component in the joint monitoring committee (JMC) under the Comprehensive Agreement on Respect for Human Rights and International Humanitarian Law (Carhrihl).

Agcaoili said the group had previous communication with the government peace panel on its scheduled visit to the country.

The NDFP delegation also had planned to meet Mr. Duterte to work for the possible resumption of peace talks during the duration of their stay in the country.

Agcaoili said he and the others had also been invited to meet with the Norwegian Ambassador to the Philippines, Bjorn Jahnsen.

On Sunday, Sison said Jalandoni and Ledesma had decided not to return to the Philippines due to threats of arrest.

Peace talks between the government and the NDFP broke down in November last year. The President blamed it on continuing rebel attacks on state forces.

On June 14 this year, the President ordered the cancellation of the resumption of formal peace talks.

He also directed a review of all agreements reached during back-channel talks and all signed peace pacts entered into by his predecessors.