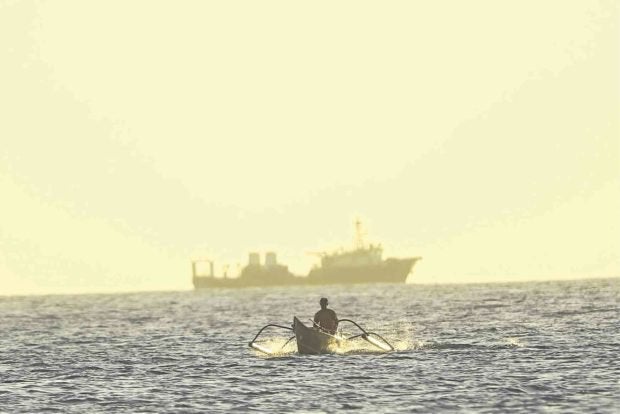 RISKY WATERS. A Filipino fisherman in a banca moves away from a Chinese Coast Guard vessel at Panatag (Scarborough) Shoal in the West Philippine Sea. INQUIRER/REM ZAMORA

Opposition Senators Francis “Kiko” Pangilinan and Antonio Trillanes IV on Monday asked President Rodrigo Duterte to first release the definitive draft of the oil and gas exploration deal with China before signing it.

In filing Senate Resolution No. 943, the senators also asked the Senate Committee on Energy to investigate the potential deals on oil and gas exploration in the West Philippine Sea.

Pangilinan and Trillanes made the call on the eve of Chinese President Xi Jinping’s state visit to the Philippines.

The senators claimed China has already produced a draft deal titled “Framework Agreement on Joint Maritime Oil and Gas Exploration between China and the Philippines,” establishing a Committee and Working Group, composed of Chinese and Filipinos, which will operate as the “working mechanisms” for the joint exploration deal.

Signing the Chinese draft, according to the senators, is a violation of the 1987 Constitution “because the Philippines will lose its exclusive sovereignty rights over its natural resources.”

The lawmakers argued that West Philippine Sea is no longer part of the disputed waters because it has been independently established that it exclusively belongs to the Philippines, citing the July 12, 2016 ruling of the Permanent Court of Arbitration in The Hague under the United Nations Conventions on the Law of the Sea.

The senators also noted the “non-transparent process” that led to the signing of the Joint Marine Seismic Undertaking (JMSU) with China on September 1, 2004, under the administration of former President Gloria Macapagal-Arroyo, a known ally of Duterte.

Arroyo was criticized for signing the JMSU, which was perceived to have justified Beijing’s supposed aggressive stance in the Benham Rise (now Philippine Rise).  /kga