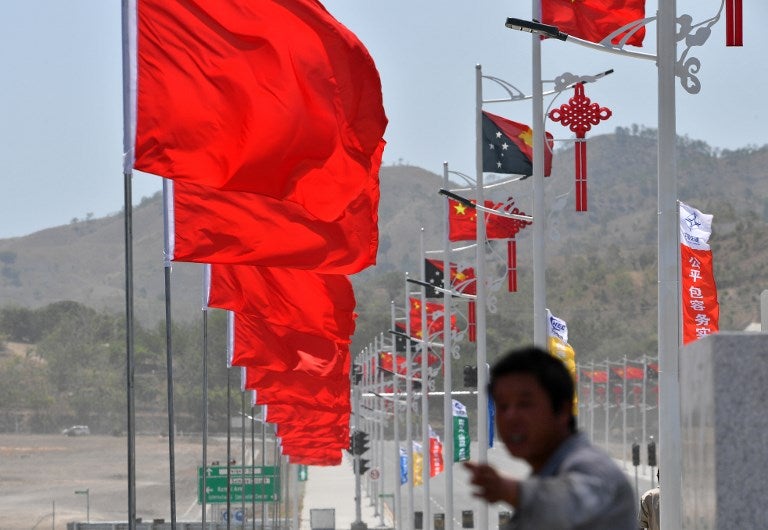 This picture taken on November 13, 2018 shows a Chinese worker giving instructions for the final touches to decorations in front of the parliament building in preparation of Chinese President Xi Jinping’s arrival and welcoming ceremony, ahead of the Asia-Pacific Economic Cooperation (APEC) summit in Port Moresby. (AFP)

With Donald Trump and Vladimir Putin absent and leaders unable even to agree a joint statement, some critics are questioning whether the annual APEC summit is still worth the effort.

“Expectations are low and probably won’t be fulfilled anyway.” That was the brutal if prescient pre-summit prediction of William Reinsch, an analyst at the Center for Strategic and International Studies.

The two-day gathering in Papua New Guinea was almost five years in the making, cost untold millions of US dollars and required the deployment of at least one battleship and three cruise liners.

And after all that, leaders came away with little more than three family photos and a loud shirt unlikely to be worn again.

The grouping was born three decades ago as a way of promoting trade liberalization. But that cause has fallen out of vogue and Port Moresby was little more than a different venue for another China-US bunfight.

For the first time ever, the leaders failed to produce a joint summit declaration -– usually a technocratic exercise in fudging differences, overstating agreement and promising great things to come.

It is likely to be a disappointment for host Papua New Guinea, which was making its debut on the international stage –- at no insignificant cost.

Prime Minister Peter O’Neill’s government — not much larger than a municipal authority in most developed countries — visibly struggled with hosting such an enormous enterprise.

It dealt with more than 21 delegations, each numbering in the dozens if not hundreds who needed to be fed, housed and watered and ferried around a city not exactly designed for armor plated motorcades.

Papua New Guinea officials forgot to provide lighting for a leaders’ photo opportunity, outside, at night and at another they put their own flag upside down.

They also suffered enormous pressure from much more powerful countries. Chinese officials on one occasion reportedly demanded that hundreds of red flags for Xi Jinping’s state visit be kept up.

In another instance, the police had to be called to prevent officials from Beijing storming the foreign minister’s office. China denies the incident.

But the summit’s failure was hardly the fault of rookie stagecraft. Skipping the leaders’ scheduled coffee break on the last day wasn’t going to provide enough time to sort through the defining strategic rivalry of our time.

“I feel sorry for Papua New Guinea, this was their big show’ said Euan Graham, executive director of La Trobe Asia, describing a diplomatic minnow caught in the crossfire of the world’s two largest economic and military powers.

Papua New Guinea did benefit from the rivalry and chequebook diplomacy of the two powers, winning new investments in energy, electricity and infrastructure.

O’Neill, like other small power leaders, also got images of himself mixing with global big hitters.

Executive director of the APEC secretariat, Alan Bollard said the organization was about more than the annual shindig.

“APEC is more than just a leaders’ meeting, but a place for economies to incubate ideas throughout the year,” he told AFP.

US officials hope that next year will bring Trump’s return, but it may matter little if protectionist and nationalistic trends persist and the United States and China continue butting heads.

“APEC’s founding vision was already fraying,” said Graham. “But the failure to agree a communique is a final death knell for a pan-Asia-Pacific trade framework.”