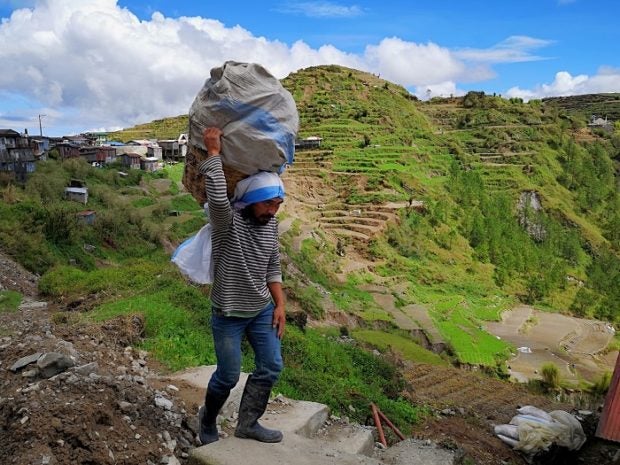 RUNNING AFOUL OF THE LAW Fertilizer dealers, who provide growers of salad vegetables with chicken manure in Benguet province, run afoul of the law, as the smell of bird droppings in their warehouses assaults the noses of residents of Trinidad and Tublay towns. —EV ESPIRITU

LA TRINIDAD, Benguet — The mayor and residents of this Benguet capital town have asked a court for an environmental protection order against fertilizer dealers, who stock chicken droppings in warehouses here and in neighboring Tublay town.

The petition filed in the Benguet Regional Trial Court on Nov. 5 said organic fertilizer traders were responsible for air pollution in the community.

It said a temporary environmental protection order (Tepo) would “serve as a lesson to other businessmen not to trample on the well-being of small citizens and [their right] to breathe clean and fresh air.”

Benguet farms, some carved out of mountain slopes, supply most of the salad vegetable demand of Metro Manila.

But La Trinidad has banned the storage and sale of chicken waste in the municipality, because of its noxious smell, after getting a 2009 court order prohibiting the trade in the villages of Shilan, Tomay and Dengsi for being a public nuisance.

Chicken droppings traders, however, resumed operations, particularly on land covered by a boundary dispute between La Trinidad and Tublay.

The lawsuit, filed by 11 La Trinidad residents, including Mayor Romeo Salda, claimed that the dung trade had rendered their neighborhoods “no longer conducive for living” because of the foul smell.

They also said “pollutants coming from the stored chicken dung may have seeped into the soil and polluted the water source nearby.”

The complaint did not cite any environmental studies to prove this claim, except for testimonies from the community that “fish, crabs, tadpoles and other water life have disappeared.”

The petitioners said they went to court after the Tublay government and the Environmental Management Bureau failed to act on their complaint.

They said a Tepo was of “absolute necessity because the continued storage of chicken dung would continue to cause air pollution in Shilan and offend and annoy the senses of residents of the place.” —Kimberlie Quitasol