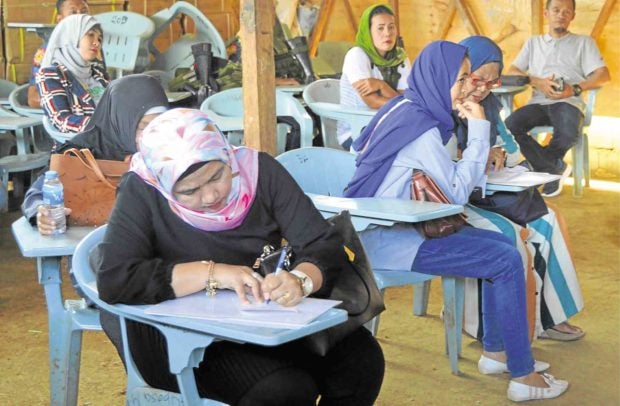 RETURNING TO NORMAL In a sign that they had been aching to return to their normal lives, displaced women residents of Marawi cast their ballots during special elections in September for village and youth council positions. —DIVINA SUSON

DAVAO CITY — The government has started expropriation proceedings for a piece of land that had been identified as site of a new military camp in Marawi City, after landowners jacked up their asking price to P10,000 per square meter.

Eduardo del Rosario, chair of Task Force Bangon Marawi, said at the Mindanao Media Summit here that prices of land in the area where the new military camp would rise hovered between P100 to P200 per sq m  before the war.

“So, we consulted the Office of the Solicitor General so that we can undertake expropriation proceedings,” he said.

Del Rosario, who also chairs the Housing and Urban Development Coordinating Council, said the process of expropriation had already started and construction of the new camp was to start in a month.

The area, which landowners wanted to sell at P2,000 to P10,000 per sq m, had been allocated a price of P5 per sq m for expropriation purpose.

Del Rosario, however, said officials would open new negotiations with the landowners before construction started.

He said officials were considering a 10-hectare land in the village of Kapantaran as site of the new military camp because of its strategic location—the area is on a hill.

Some Marawi groups, however, had said most residents were opposed to the camp.

Drieza Lininding, chair of Moro Consensus Group, said Marawi City would not need another military camp as the city already had one.

Del Rosario said the presence of another military camp “would ensure the safety” of residents from the “lingering” danger of terrorism.