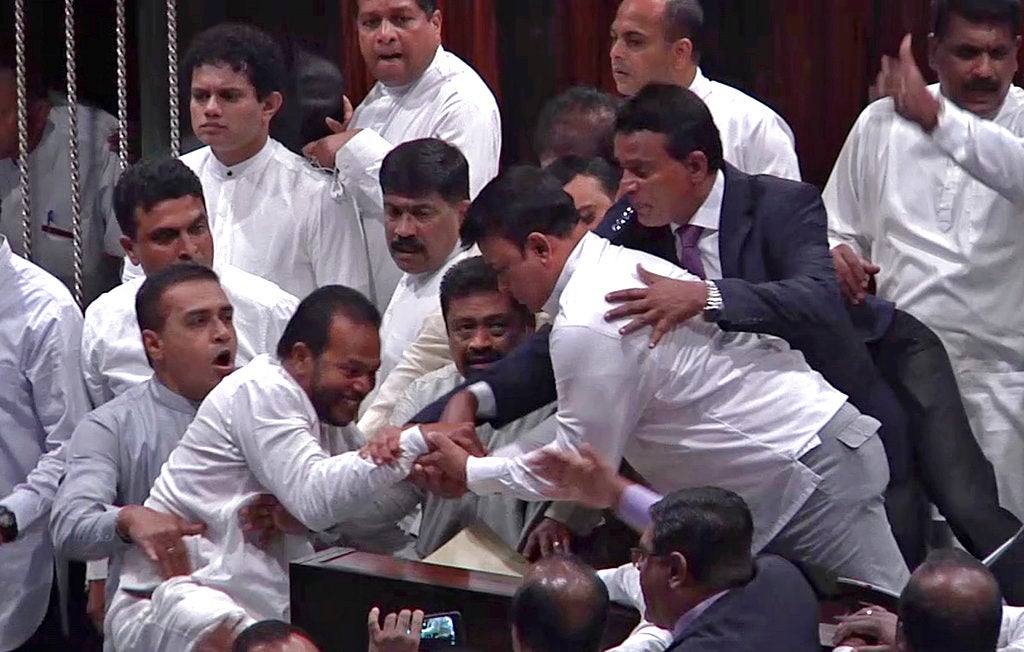 In this image made from video, Sri Lanka’s lawmakers scuffle at the parliament in Colombo, Thursday, Nov. 15, 2018. Rival lawmakers have exchanged blows in Sri Lanka’s Parliament as the disputed Prime Minister Mahinda Rajapaksa claimed the speaker had no authority to remove him from office by voice vote. (AP Photo)

COLOMBO, Sri Lanka — Rival lawmakers exchanged blows in Sri Lanka’s Parliament on Thursday as disputed Prime Minister Mahinda Rajapaksa claimed the speaker had no authority to remove him from office by voice vote.

The fighting in the chamber came a day after it passed a no-confidence vote against Rajapaksa’s government. When Parliament re-convened, Speaker Karu Jayasuriya said the country had no government and there was no prime minister — either Rajapaksa or his rival, whose ousting in late October by the president started the crisis.

Rajapaksa disagreed, saying “a vote should have been taken. Such important motions should not be passed by a voice vote.” He added that Jayasuriya has no power to remove or appoint the prime minister and Cabinet members.

He accused the speaker of being partial and representing the position of his party, the United National Party, which is led by ousted Prime Minister Ranil Wickremesinghe.

Rajapaksa also called for fresh elections, suggesting that it was the best way to resolve the crisis.

The brawl erupted after the opposition asked for a vote on Rajapaksa’s statement, with lawmakers supporting him gathering in the middle of the house while some ran toward the speaker shouting slogans condemning his behavior.

More than 50 lawmakers in the 225-member house fought and some who fell on the floor were kicked by rivals. Some of the lawmakers supporting Rajapaksa threw water bottles, books and trash cans at the speaker. Those opposed to Rajapaksa surrounded Jayasuriya to protect him.

Dilum Amunugama, an ally of Rajapaksa, was taken to a hospital with injuries to his hand while trying to pull out a microphone from the speaker’s table.

The commotion went on for about half an hour before Jayasuriya adjourned the house.

“The speaker was under complete siege, he came very close to being physically assaulted by MPs supporting Rajapaksa,” said Chandani Kirinde, a senior correspondent of the Sunday Times, a weekly paper in Sri Lanka. “While clashes have happened in the house, this is probably the first time the speaker came under so much intimidation and abuse.”

On Wednesday, Jayasuriya said debate on the no-confidence motion was not possible after the chamber descended into chaos and he had no choice but to take an oral vote.

In January, lawmakers also exchanged blows during a debate over alleged corruption that marred the reputation of Wickremesinghe’s government that was elected on a platform of good governance.

Sri Lanka has been in a crisis since Oct. 26, when President Maithripala Sirisena suddenly fired Wickremesinghe and replaced him with Rajapaksa. The former president is considered a hero by some of the ethnic Sinhalese majority for ending a long civil war by crushing Tamil Tiger rebels. However, his time in power was marred by allegations of wartime atrocities, corruption and nepotism.

Tensions had been building between Sirisena and Wickremesinghe for some time, as the president did not approve of economic reforms introduced by the prime minister. Sirisena has also accused Wickremesinghe and another Cabinet member of plotting to assassinate him, a charge Wickremesinghe has repeatedly denied.

Sirisena had also suspended Parliament, apparently to allow Rajapaksa time to gather support among lawmakers. But Wickremesinghe insisted his firing was unconstitutional. He refused to vacate his official residence and demanded that Parliament be summoned to prove he still has support.

On Tuesday, the Supreme Court suspended Sirisena’s order to dissolve Parliament and hold new elections until next month. /kga

Read Next
‘Uphold youth’s right to education’ in mandatory drug test — CHR
EDITORS' PICK
Give anti-terror law a chance, ditch misinformation – Defense Sec. Lorenzana
Smart releases Hyun Bin’s second TVC
Military on heightened alert in Maguindanao after BIFF attacks
For nation’s birthday, Trump slams the enemies within
EuroMillions Superdraw: A lottery draw unlike any other is coming to the Philippines
Water remains our saving grace right now
MOST READ
MIAA: International flights will resume July 8
Tesla sales boosted by entry-level sedan
2 carriers in South China Sea, US bares
As Ringo Starr turns 80, he talks about his life, Beatles journey, including that unfortunate Manila experience
Don't miss out on the latest news and information.