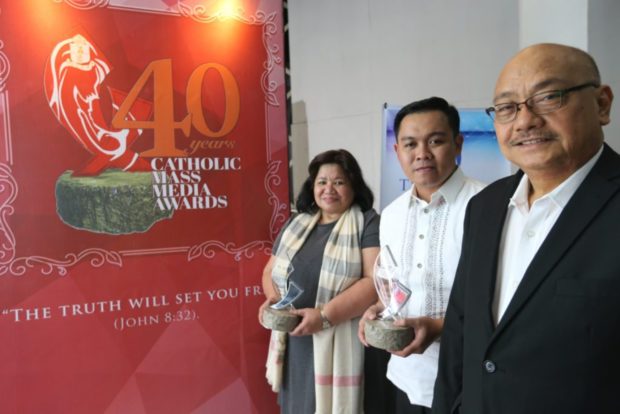 AND the winning continues.

The Inquirer’s Niño Jesus Orbeta won the Best News Photograph award for his work “Sisterhood,” which shows a nun embracing and kissing Sister Patricia Fox during a solidarity Mass for held for the Australian missionary. Fox was then fighting deportation ordered by the Bureau of Immigration.

Also, the CMMA conferred to CDN the Best in Special Feature and Best in News Coverage awards.

Cebu’s only independent newspaper was the only awardee from outside Luzon.

Fighting fake news, Mayol said, should be “centered in our faith because Jesus is the real path towards truth.”

“Sifting Through the Lies” which was edited by Rosemarie Holganza-Borromeo, bested seven other entries: ”Wasted Children” by Sun.Star Cebu; “Life Behind Bars” and “Life Within Walls” by The Windhover; three stories of the Inquirer, and Senator Francis Pangilinan’s Tagsibol.

The stories were edited by CDN Editor-in-Chief Ma. Edralyn Benedicto.

Mayol and Benedicto received the CMMA trophies during the awards rites which was also attended by CDN Publisher Abelardo S. Ulanday.

“We gave our all to deliver the best reportage and sendoff to a prelate loved by the Cebuanos. That we won the CMMA Best in [News] Coverage is both an honor and a fitting tribute to the late Cebu Archbishop Emeritus Ricardo Cardinal Vidal,” Benedicto said.

This is the third straight year that Mayol won both the Best in News Coverage and Best in Special Feature awards for the 20-year-old community paper published by the Philippine Daily Inquirer.

This year, CDN is the only community paper outside Luzon that was given recognition by the CMMA.

Last May, the paper was also hailed as the Best Edited Community Paper by the Philippine Press Institute (PPI).

The paper was cited because it “has covered issues and concerns relevant to the community and strived to present stories with multiple sources.” /cbb