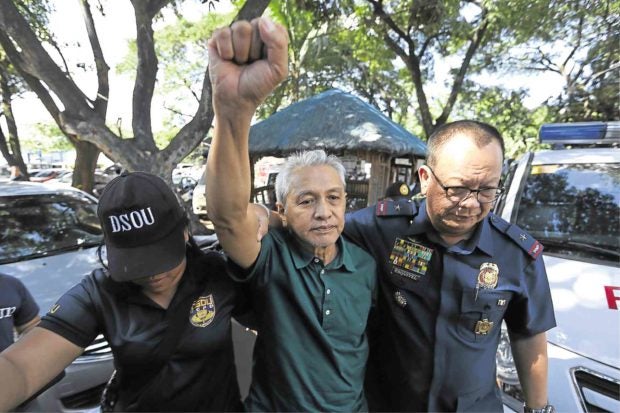 The arrest of National Democratic Front of the Philippines (NDFP) consultant Vicente Ladlad was “a legitimate law enforcement operation” that has no effect on the government’s peace talks with communist rebels, Defense Secretary Delfin Lorenzana said on Wednesday.

Police arrested Ladlad on Thursday last week in Quezon City and charged him with illegal possession of firearms and explosives.

But Ladlad’s wife Fides Lim claimed that the AK-47 and M16 rifles, as well as hand grenades that were allegedly confiscated from him were planted.

“How can the peace process be derailed when it has been suspended or stopped last June by the President?” Lorenzana said, rejecting an earlier statement by Lim.

In denying that the firearms were planted, Lorenzana said Lim’s claim was intended to discredit the Philippine National Police and exonerate her husband.

Ladlad should have turned himself in after the peace talks were suspended, the defense chief said.

“His provisional liberty [so he could] be part of the NDFP panel as a negotiator had also expired,” he added.

Lim, Lorenzana said, should allow the courts to decide on her husband’s innocence or guilt.

He said that since the 1980s, localized peace efforts had been far more successful than national-level talks with the rebels.

He said the Enhanced Comprehensive Local Integration Program of the Task Force Balik Loob had been able to convince thousands of rebels and supporters to reintegrate in the communities. —Jeannette I. Andrade