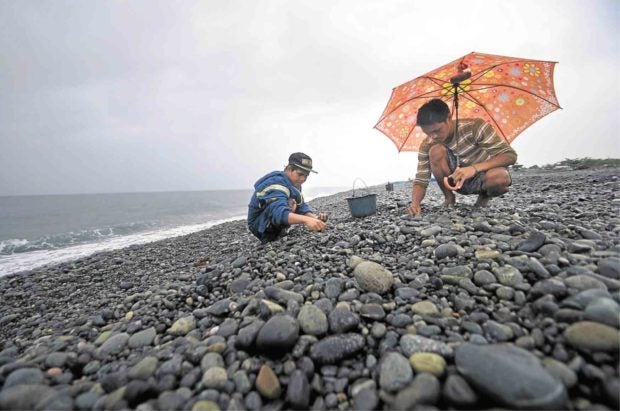 STONE PICKERS Stones and pebbles on the shores of Luna town in La Union province provide residents a source of livelihood as landscape and construction firms seek these materials. RICHARD BALONGLONG

The Koalisyon Isalbar ti Pintas ti La Union (Coalition to Save the Beauty of La Union, or CSBLU), said the project of Global Luzon Energy Development Corp. (GLEDC) was “risky, polluting and destructive.” GLEDC is a subsidiary of Global Business Power Corp. (GBPC), which is part of the Metro Pacific Group.

Despite protests by La Union residents, the Environmental Management Bureau issued the project an ECC on Oct. 4, said Crisanto Palabay, CSBLU chair. The groups learned about the ECC on Oct. 31.

Two coal-fired plants will be built on a 41-hectare property straddling Barangay Carisquis and Nalvo Sur, which face the West Philippine Sea.

The project site is near beach resorts as well as the 3-kilometer stretch of pebble beach where the 400-year-old Spanish baluarte (watchtower) is located.

The Inquirer sought GBPC but it had not issued a statement as of Wednesday afternoon. First Metro Investments Corp., one of the project proponents, declined to comment.

Luna Mayor Victor Marvin Marron, when reached on Tuesday, asked for time to study the issue.

In a petition to Cimatu, CSBLU said the project would harm Luna’s unique pebble-rich shoreline, white beaches and cove, and a heritage park dedicated to the heroism of soldiers during World War II.

“Within the 5 to 20 aerial-kilometer radius of the proposed coal-fired plant are the towns of Balaoan, known for its bountiful corn harvests and biodiverse coral gardens, and San Juan, the surfing capital of the North. The plant could also affect the grape farms of Bauang town,” the groups said.