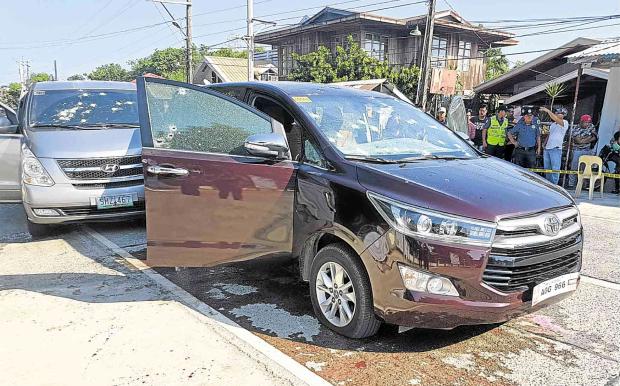 The La Union municipal executive became the 19th victim of fatal attacks on local officials since 2016 in what police believe could be related to politics or drugs. (Photo courtesy of the Balaoan Municipal Police Station)

Gunmen firing from both sides of a road in Balaoan town, La Union province, killed Vice Mayor Al-Fred Concepcion and one of his aides, and wounded his daughter, Mayor Aleli Concepcion, on Wednesday morning.

It was the third fatal attack on La Union politicians this year, according to the police.

Chief Insp. Silverio Ordinado, La Union police spokesperson, said the Concepcions were traveling in separate cars and were about 300 meters from the town center when the gunmen peppered their vehicles with bullets.

“There were bullet cases and even empty M16 magazines on both sides of the road,” he said, indicating that the gunmen had waited in ambush for the Concepcions’ convoy on Balaoan-Luna Road.

The vice mayor and his aide, Michael Ulep, died on the way to Balaoan District Hospital.

Mayor Concepcion was taken to a hospital in San Fernando City, the provincial capital, about 36 kilometers away.

Police have yet to identify the gunmen’s getaway vehicles, Ordinado said.

He said investigators were hoping to secure video images of the area that could show how many gunmen were involved.

Just over a month ago, on Oct. 1, Mayor Alexander Buquing of Sudipen town was gunned down on his way home on a pickup truck. He shielded his wife, Vice Mayor Wendy Joy Buquing, from the barrage of fire but she was also wounded.

The mayor’s police security aide and his driver also were killed. His wife has assumed his post.

On May 12, former La Union Rep. Eufranio Eriguel was killed by armed men who stormed a Sangguniang Kabataan meeting at Barangay Capas in Agoo town.

Last week, the La Union prosecutor’s office filed two murder cases and a frustrated murder case against Rosendo Sibayan, 29, who was arrested on Oct. 10 for the attack on Buquing.

Police believe five men were involved in the attack. The other four, who have yet to be identified, remain at large.

In the Eriguel murder, police have arrested Felizardo Villanueva, a losing candidate for Capas barangay chair.

An exchange of text messages on Villanueva’s cell phone allegedly showed that he gave the gunmen the former congressman’s location before the attack, the police said.

“We will pursue and prosecute the persons behind these brazen murders and bring them to justice,” said presidential spokesperson Salvador Panelo.

“We also express our heartfelt condolences to the grieving families and friends of the late Vice Mayor Al-Fred Concepcion and his aide, Mr. Michael Ulep. We likewise pray for the speedy recovery of Mayor Aleli Concepcion and the victims who were critically wounded during this atrocity,” he said in a statement.

Philippine National Police Director General Oscar Albayalde told reporters in Manila that investigators were “looking into the possibilities [that there was] political motivation [in the attack] because it seems there are heated rivalries in the province” and a private armed group may have been hired to carry out Wednesday’s ambush.

On Monday, the PNP announced the arrest of several members of the Ricardo Peralta gun-for-hire group that offered services to politicians.

The group operated in the provinces of La Union, Cagayan, Bulacan, Cavite, Laguna, Batangas, Rizal and Quezon, and Metro Manila.

Peralta, who carries a P10-million bounty on his head, remains at large.

“It’s not far off that there is a mayor or politician who coddles the group, because Ricardo Peralta started actually as a civilian asset before his path became crooked. Some politicians saw he could be used, so politicians started hiring him and his group,” Albayalde said.

“We don’t have evidence to pinpoint the group … so we cannot ascertain that. That’s just part of the investigation,” he added.

Ordinado said Concepcion, 61, and his 33-year-old daughter, were not on the police list of so-called “narcopoliticians,” adding that Balaoan town was declared drug-free in April.

In 2007, he was elected mayor and was reelected in 2010 and 2013. When he reached his term limit, Concepcion ran for vice mayor in 2016, with his daughter as the mayoral candidate.

The father-daughter team had registered to run for reelection in next year’s polls.

Mayor Concepcion, a lawyer, is the first female mayor and so far the youngest chief executive of Balaoan town.

She served as Sangguniang Kabataan chair of Barangay Dr. Camilo Osias from 2002 to 2007 and as its barangay chair from 2013 until 2016 when she ran for mayor. —With reports from Christine O. Avendaño and Jaymee T. Gamil