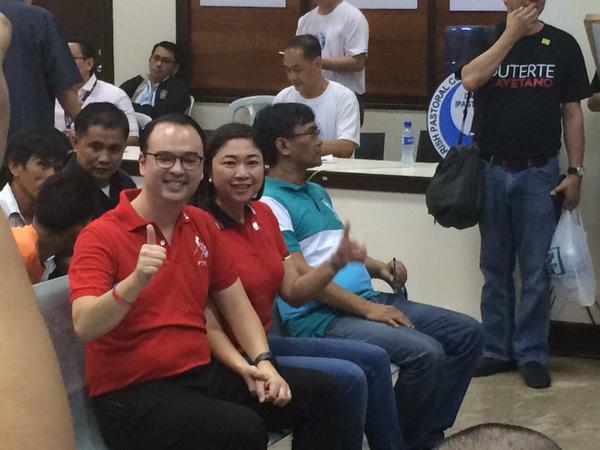 The congressional bids of Alan Peter Cayetano and his wife Lani were questioned in separate petitions, claiming that the two are “ruthlessly running-in-tandem.”

The petitions, filed by election lawyer Emilio Marañon III for a certain Leonides C. Buac Jr. on November 12, asked the Commission on Elections (Comelec) to cancel the couple’s certificates of candidacy (COCs) over an apparent ploy on “dynastic expansion.”

“The Cayetano family year in and year out, has been treating the elections as a ‘merry-go-round’ with all the family members playing hard and dirty to land every seat they can,” the petition said.

“Lani Cayetano and Alan Cayetano decided to run in two of two legislative districts of Taguig, ruthlessly running-in-tandem for its total control and even of its neighboring municipality, Pateros,” it added.

According to the petition, the Cayetano couple has failed to possess the minimum residency qualification imposed by the 1987 Constitution for members of the House of Representatives.

Marañon cited Articles 68 and 69 of the Family Code that mandates the couple to “fix one matrimonial domicile or residence.”

“The matrimonial domicile as fixed by the spouses is controlling in determining their residence for purpose of election,” he said in a statement.

“Thus, following this rule, the spouses cannot keep separate domiciles or for one spouse to claim a separate and independent domicile from the matrimonial domicile,” he added.

Marañon further said that Alan and Lani cannot claim to have different homes – one in Barangay Bagumbayan and the other in Barangay Fort Bonifacio.

“In other words, they cannot run in two different districts or jurisdictions at the same time,” he said.

The petition pointed out that such declaration of the Cayetano couple in their respective COCs raise “serious legal infirmities” on their qualifications since Alan and Lani “being married and obliged by law to live together in one domicile—ran in TWO separate districts.”

“In this case, the Commission has the opportunity to address this scheme of dynastic expansion by carefully looking at the issue of residence being raised against the RESPONDENT, resolving the same duly guided by the Constitutional policy against political dynasties and its mandate to ensure greater access to opportunities for public service,” the petition reads.

The petitioner then urged Comelec to enforce the law on the qualifications of the Cayetano couple to run in next year’s elections since their acts have “have grossly violated” the law. The constitutional body was further asked to “step in and give life on the Constitutional policy against political dynasties and implement its mandate to ensure greater access to opportunities for public service.”  /kga