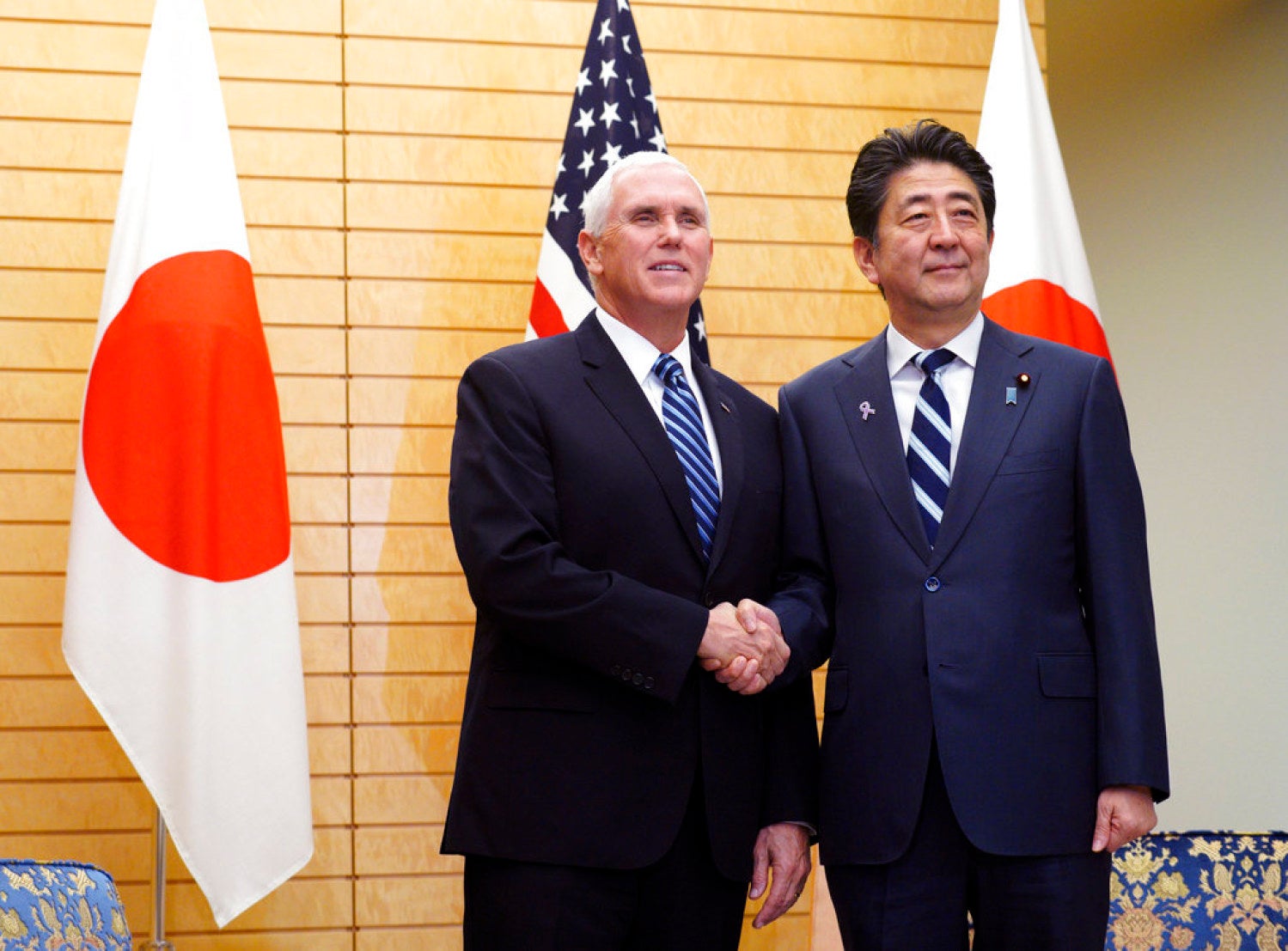 TOKYO — U.S. Vice President Mike Pence and Japanese Prime Minister Shinzo Abe on Tuesday reaffirmed the need to keep sanctions on North Korea to achieve its denuclearization as they showcased their bilateral alliance, while Pence also urged Japan to do more to reduce the U.S. trade deficit.

Pence and Abe also agreed to deepen cooperation in promoting energy, infrastructure and providing loans to nations in the region.

Pence said the U.S.-Japan alliance is a “cornerstone” of the region’s peace and prosperity and said Japan is not only an ally but a friend, but that Japan needs to do more to reduce the bilateral trade imbalance.

U.S. products and services often face barriers to complete fairly in Japanese market, Pence said. He said economic dialogue over the past two years have addressed some issues, but “the best opportunities for free, fair and reciprocal trade will come in a bilateral agreement.”

Japan has faced demands that it reduce its trade surplus with the U.S. and is also concerned about the impact of Trump’s trade war with China.

On Tuesday, Abe said Japan is willing to expand trade and investment “to make it mutually beneficial for Japan and the U.S. in order to seek free and open economic development in the Indo-Pacific region under fair rules.”

Pence said in a recent opinion piece in The Washington Post that America will soon begin negotiations for “a historic trade agreement with Japan.”

Pence and Abe gave reassurances of their cooperation on North Korea’s denuclearization.

North Korea has embraced diplomacy this year after its repeated missile and nuclear tests have escalated tension and fears of war, but Japanese and U.S. officials remain skeptical if the North will actually abandon its nuclear weapons, suspecting that Pyongyang may be trying to get sanctions eased.

On China, Abe explained recent improvements in Japan-China relations as demonstrated in his visit to Beijing for formal bilateral summit with President Xi Jinping. Pence said the U.S. wants a relationship with China based on fairness and reciprocity, and that Japan and the U.S. will continue to cooperate closely to deal with China’s increased influence in the region.

Pence was to leave later Tuesday to attend a meeting of the Association of Southeast Asian Nations in Singapore and an Asia-Pacific Economic Cooperation summit in Papua New Guinea on behalf of Trump.  /muf

Read Next
Doctors slam NRA: We wouldn’t be in the lane if guns didn’t kill so many people
EDITORS' PICK
SM prepares for ‘safe malling’
Duterte assures Filipinos: We’re far from martial law despite health crisis
DOTr to install bike lanes along Edsa
Duterte ‘sure’ China will be first to develop COVID-19 vaccine
Notice of 2020 regular meeting of stockholders June 18, 2020
Leveling up your ‘lutong bahay’ with the kitchen companion you never knew you needed
MOST READ
Duterte approves Metro Manila’s shift to GCQ starting June 1
Bocaue Mayor Joni Villanueva passes away, Sen. Villanueva confirms
Año: Quarantine passes not needed in GCQ, movement restricted to essential travel
NCR is ready for GCQ — Palace
Don't miss out on the latest news and information.