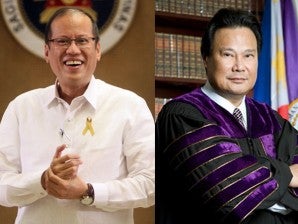 The two are guests at the opening of the first National Criminal Justice Summit hosted by the Department of Justice (DOJ) after the President, using the 30th anniversary celebration of the Makati Business Club on Thursday, slammed the Supreme Court for allegedly hobbling his reform programs.

Mr. Aquino will keynote the summit at the Manila Hotel; Corona is expected to deliver a speech for the judiciary.

“I guess we’ll have to see,” deputy presidential spokesperson Abigail Valte said when asked over state radio dzRB if the two will meet during the two-day gathering. “We’ll just have to wait for that particular event.”

“The President does not shy away from discussing national issues, if necessary,” Communications Secretary Ricky Carandang said in a phone interview.

“The President has every right and even the duty to express his views and sentiments on such issue of national importance,” Justice Secretary Leila de Lima said in a text message to the Philippine Daily Inquirer.

The Palace and judiciary have been at loggerheads since Mr. Aquino was elected last year. The President had even refused to take his oath before Corona, a so-called “midnight” appointee of outgoing President Gloria Macapagal-Arroyo.

The Chief Executive had been very vocal about his opposition to several decisions by the court, including its recent decision to allow Arroyo, now a Pampanga representative, to travel abroad for treatment of a bone ailment which De Lima defied.

Arroyo is now under hospital arrest but has questioned before the high court the constitutionality of the DOJ-Commission on Elections task force that recommended the election sabotage case filed against her that ultimately was used to justify the move to keep her under government custody.

Senator Joker Arroyo on Sunday said Mr. Aquino’s latest blast at the court was the handiwork of his legal advisers who must be cautioned against criticizing the high tribunal.

“I cannot blame the President for his remarks since he is not a lawyer. But he cleared his statements with his legal advisers so they should be the ones held accountable,” said the senator, who is not related to the former President.

“When government officials criticize the Supreme Court, it does not have the power to answer. And are they saying that the (12) justices appointed during the time of Gloria cannot render right judgment? That the present composition of the Supreme Court cannot make a right decision,” he asked.

“Before they speak again, they better look at history,” the senator said, referring to then President Corazon Aquino’s appointment of all 15 justices of the Supreme Court after the 1986 Edsa People Power Revolution that ousted the dictator Ferdinand Marcos.

Senator Arroyo said that the court was then led by Claudio Teehankee, a known dissenter as an associate justice during the Marcos years.

The senator recalled that the late Senator Lorenzo Tañada had advised his opposition colleagues in the anti-Marcos movement to “never get personal with the Supreme Court.”

“Even during those times when we cannot expect justice from the Supreme Court, we never got personal.  We were careful not to attack it even if it gives an unfavorable decision.  But now, just because it issues a TRO (temporary restraining order), it is branded as a lapdog of Gloria. Is that the situation now, that they are free to attack anyone? We should be careful there,” he warned.

Senator Franklin Drilon, a known critic of Corona, stressed that the Supreme Court “is not exempted from criticism. Any lawyer can question its decisions.”

Drilon said “respect” for the Supreme Court cannot be ordered. “You should show that you deserve respect. All this is happening because of public perception that the tribunal is not an impartial arbiter.” With a report from Marlon Ramos