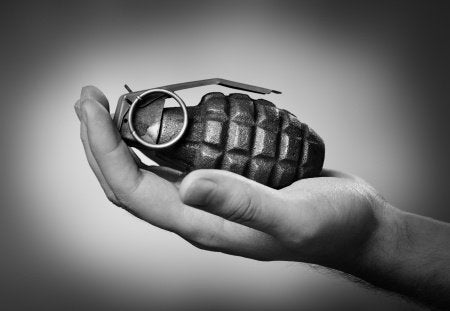 KIDAPAWAN CITY – A businessman and a watchman were hurt when unidentified men tossed a hand grenade a roadside store in Pikit, North Cotabato Sunday night.

Supt. Bernard Tayong, speaking for the police in North Cotabato, identified the victims as Kim John Tanada, 28, and watchman Christopher Montecino, 39, both residents of Poblacion, Pikit.

Tayong said the suspects on a motorbike drove by a store along Colony Street and tossed a grenade at about 8 p.m.

Police believed a personal grudge behind the attack.

The victims were first brought to Cruzado Medical Clinic but were later moved to another hospital in the province.

Suspects fled toward Barangay Ladtingan, a gateway to the Liguasan marshland, a lair of the outlawed Bangsamoro Islamic Freedom Fighters blamed for the series of violence in North Cotabato and Maguindanao.

Chief Inspector Teng Bacal, Pikit police chief, said investigators were following up on a lead about the suspects’ identities. /cbb