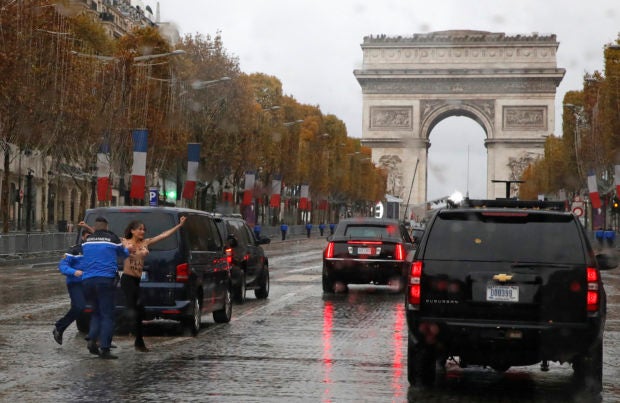 French police officers apprehend a topless protester who ran toward the motorcade of President Donald Trump who was headed on the Champs Elysees to an Armistice Day Centennial Commemoration at the Arc de Triomphe, Sunday Nov. 11, 2018, in Paris. Trump is joining other world leaders at centennial commemorations in Paris this weekend to mark the end of World War I. AP

PARIS, France — A feminist activist pretending to be a photographer managed to breach security at a huge international ceremony in Paris and disrupt U.S. Presidential Donald Trump’s motorcade as part of a peace protest.

With thousands of security forces deployed around the French capital, questions swirled around how the woman and two other activists from feminist group Femen got so close to scores of world leaders gathered on the Champs-Elysees to mark 100 years since the end of World War I.

The photographers alerted French presidential officials as well as police, and the woman was led away, Marin said. However, soon afterward she dashed out onto the Champs-Elysees in front of Trump’s motorcade, shouting “fake peace maker.”

At that point, she was detained along with two other Femen protesters in the crowds of onlookers along the Champs-Elysees. All three had “fake peace makers” scrawled across their breasts, according to Inna Shevchenko, one of Femen’s leaders.

The three are facing charges of sexual exhibitionism, a judicial official said.

Shevchenko would not comment on the fake photographer ploy. She said all three arrested activists had been in areas open to the general public, and that their action was peaceful.

French President Emmanuel Macron’s office would not comment on how the woman was accredited using a false identity.

A Paris police official said authorities were investigating the breach. Interior Minister Christophe Castaner sought to play down the incident, and was quoted by BFM television as saying the women were unarmed and security of the event was “in no way threatened.”

Shevchenko said the point of Sunday’s protest was to “denounce this hypocrisy” of holding an event celebrating peace with leaders such as Trump and Putin “who represent everything but not peace.”

She singled out Trump for criticism for his “aggressive attitude toward European leaders and hostile ideas” toward multilateral cooperation.

Macron also criticized the kind of nationalism that Trump espouses, but his office insisted on the importance of inviting the American president and other leaders because of their role in World War I.