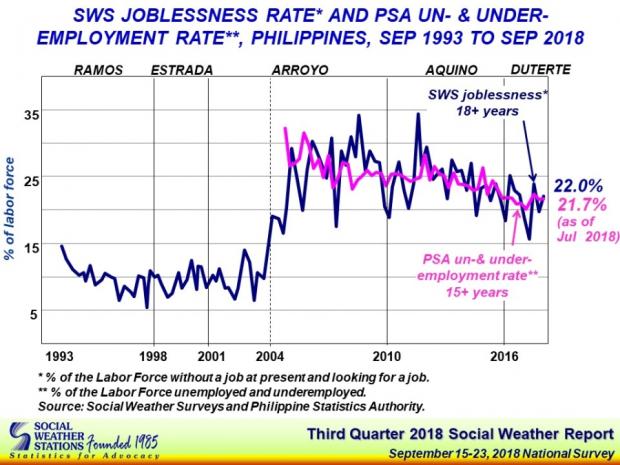 Jobless adult Filipinos numbered 9.8 million in the third quarter of the 2018, according to a Social Weather Stations (SWS) survey, whose results were released on Saturday.

The 9.2 percent who were retrenched composed of 6.6 percent had previous contracts that were not renewed, 1.6 percent were laid off, and 1 percent had employers that closed operations.

In Balance Luzon, joblessness was at 22.9 percent which is 3.5 points higher than 19.3 percent in June.

Meanwhile, in Visayas, joblessness also increased with 19.6 percent which was .6 points higher from 19 percent in June.

The survey also revealed that joblessness was higher among women at 32.8 percent compared to men at 14.3 percent.

Optimism that there will be more jobs decreased by 8 points with 39 percent in September from 47 percent in June.

However, pessimism that there will be fewer jobs rose by one point from 15 percent in June to 16 percent in September.

Meanwhile, for those who say there will be no change in job availability increased by 3 points from 24 percent in June 2018 to 27 percent in September.

[Twelve months from now, do you think there will be MORE JOBS, NO CHANGE in available jobs, or FEWER JOBS?]

SWS said adult joblessness is composed of “those who voluntarily left their old jobs, those who lost their jobs due to economic circumstances and those seeking jobs for the first time.”

The survey involved interviews with 1,500 adults — that is, those aged 18 years and older — of which 600 were interviewed in Balance Luzon and 300 each in Metro Manila, Visayas and Mindanao.

The survey had a sampling error margins of ±3 percent for national percentages, ±4 percent for Balance Luzon, and ±6 percent each for Metro Manila, Visayas, and Mindanao. /atm