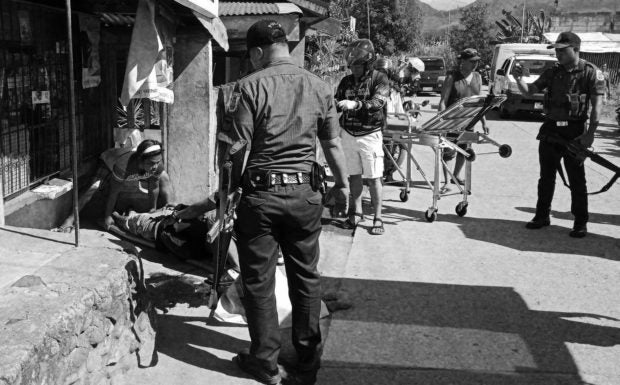 Jaime Bisnar is being loaded to a stretcher so he could be brought to the hospital for treatment after he was shot by still unidentified assailants in Barangay Benolho, Albuera town, Leyte on Thursday morning. -Robert Dejon, Inquirer Visayas

ALBUERA, Leyte — One of the alleged hitmen of self-confessed drug lord Kerwin Espinosa was fighting for his life after he was shot on Thursday in Barangay Benolho here.

Jaime Bisnar, 47, was waiting for a ride when two men on board a motorcycle stopped in front of him about 9 a.m.

The back rider then got off from the motorcycle and fired at Bisnar before going back to his companion and sped off.

Bisnar was brought to a private hospital in nearby Ormoc City where he was in critical condition.

Senior Insp. Salvador Apacible Jr., acting Albuera police chief, said Bisnar used to be a hitman of Espinosa when the latter used to monopolize the drug operations in Eastern Visayas.

He said two Espinosa underlings had been killed since October this year.