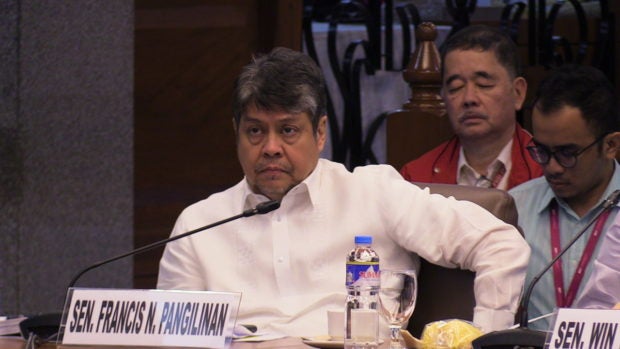 Senator Francis “Kiko” Pangilinan warned the government on Thursday of possible legal questions that may be raised against the entry of the consortium of businessman Dennis Uy’s Udenna Corp. and the state-run China Telecom as the third telco player in the country.

The senator cited other projects with China such as the NorthRail project and National Broadband Network (NBN) deal with China’s ZTE Corp. that were scrapped due to alleged irregularities.

“Government must be extremely careful that because of legal questions this effort will go the way of other controversial China-funded govt contracts such as the ZTE NBN deal and the Northrail project which were eventually scrapped due to irregularities,” Pangilinan said in a text message.

Pangilinan said that more than security concerns, he was also seeing legal, technology and policy concerns in the entry of the Udenna-Telecomm consortium as the third telco, questioning Davao-based businessman Dennis Uy’s expertise on telcos.

“Why only one qualified bidder? What is Dennis Uy’s expertise and what does he know about telcos?” Pangilinan said.

“I am hoping that their entry will bring competition to the sector and will improve the quality of telecommunications services in the country,” Villanueva said in a statement.

He said the entry of a third telco was a good sign for the Telecommuting Act or Work from Home Bill which would allow employees to offer “telecommuting” or working from home.

“We expect that the entry of a third telco player will boost competition and lead to an upgrade of our existing internet infrastructure so our employees could soon afford an option to work efficiently under our proposed flexible work arrangement,” Villanueva said.

The senator said he hoped the National Telecommunications Commission would ensure that the third telco player to fulfill its commitment to Filipinos to provide the best possible service at the lowest possible cost. /cbb