AFP: No role in abduction of ‘lumad’ teacher’s mother 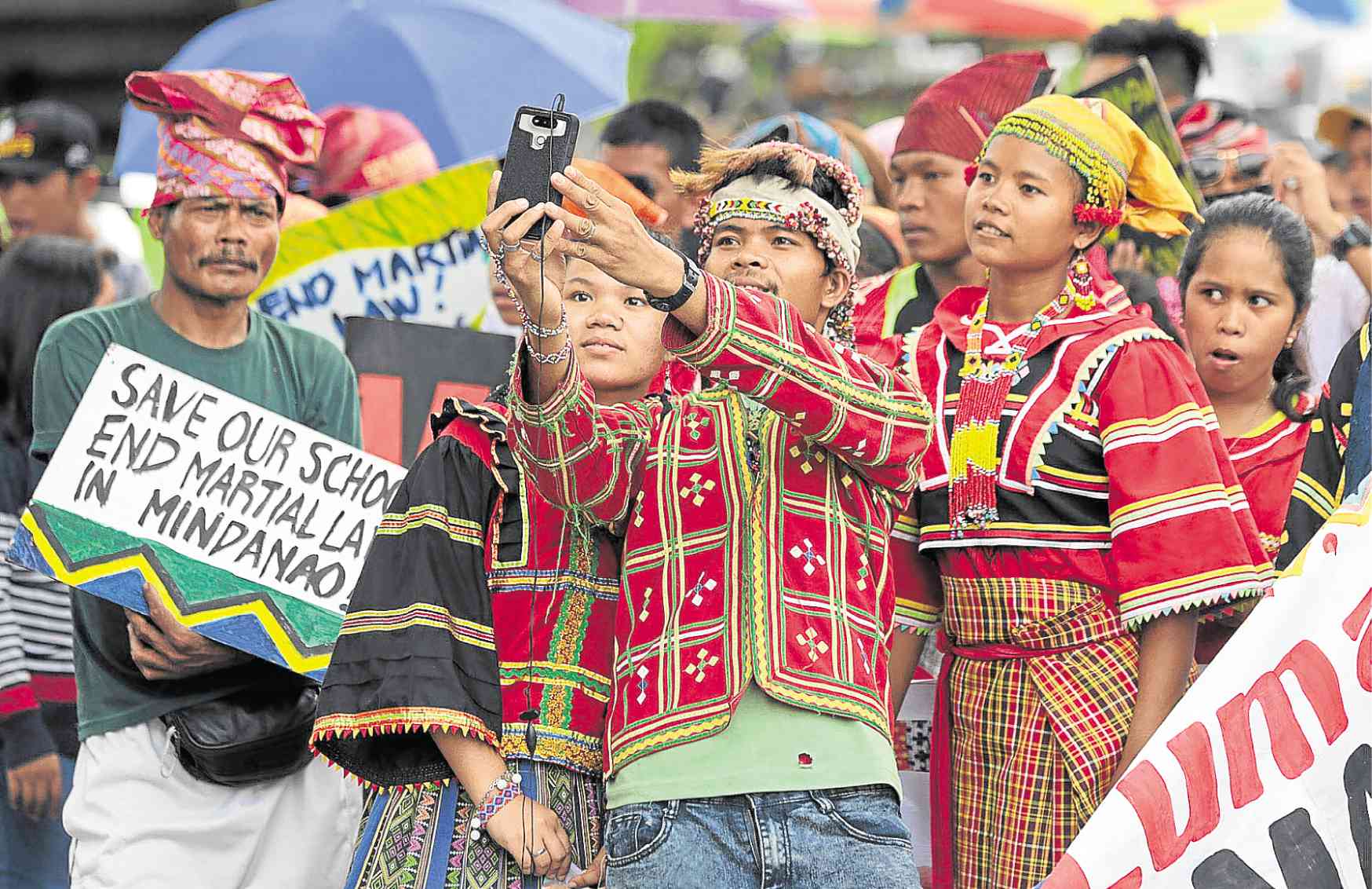 ‘LUMAD’ CALL A group of “lumad” (indigenous peoples) youth joins a protest action in Quezon City to call on the government to end martial law in Mindanao and spare their schools from bombings. GRIG C. MONTEGRANDE

DAVAO CITY — An Army official here has denied any link of the Armed Forces of the Philippines to the reported abduction of the mother of a volunteer teacher of a “lumad” (indigenous peoples) school in Compostela Valley, saying such an act is prohibited in the military service.

“Abduction is a criminal offense more so that the abductors are asking for ransom [money] for the release of the abducted person,” Maj. Ezra Balagtey, Eastern Mindanao Command spokesperson, said on Tuesday.

Soldiers found to be guilty of such practice would be subjected both to the military justice and criminal justice system, Balagtey said in reaction to a statement from the lumad school Salugpongan Ta’ Tanu Igkanogon Community Learning Center (STTICLC) on the abduction of Imelda Hayahay, mother of lumad volunteer teacher Jeany Rose Hayahay.

Meggie Nolasco, executive director of STTICLC, earlier said they had reasons to suspect the military could be behind the disappearance of Hayahay because of the presence of soldiers in the neighborhood on the night of the abduction on Oct. 16.

She also said that when the family asked about Hayahay, a ranking military official had assured them that the teacher was well. But until now, her family knew nothing about Hayahay’s whereabouts since she was taken from their house at Barangay Pindasan in Mabini town, Compostela Valley, on Oct. 16.

Balagtey dismissed Nolasco’s allegation as “malicious, illogical and a cheap gimmick” meant to malign the military’s peace and development projects in the province.

Lt. Col. Esteveyn Ducusin, commander of the Army’s 71st Infantry Battalion, denied his troops were involved in the abduction.

Instead, Ducusin accused communist rebels of carrying out Hayahay’s abduction “in retribution for her misdeeds.”

Nolasco also named the Army’s 56th Infantry Battalion as the “unseen hand in the latest string of harassment” of volunteer teachers and threats to close the lumad schools in Talaingod town, Davao del Norte province.

In Davao region, 21 STTICLCs were allowed to operate by the Department of Education, she said. Of the 21 lumad schools, only 18 are operating because of constant threats that hampered school operation, she said.

She said the military had been using tribal leaders to evict lumad schools and threaten school children and volunteer teachers.

“The military has used this tactic of dividing the lumad to force them to close down our schools. They use Red baiting, intimidation and disinformation in this counterinsurgency campaign but this is far from the truth,” she said.

Balagtey belied Nolasco’s claim that they were behind the campaign to shut down the lumad schools in Davao region. —With reports from Mart Sambalud and Jeannette Andrade