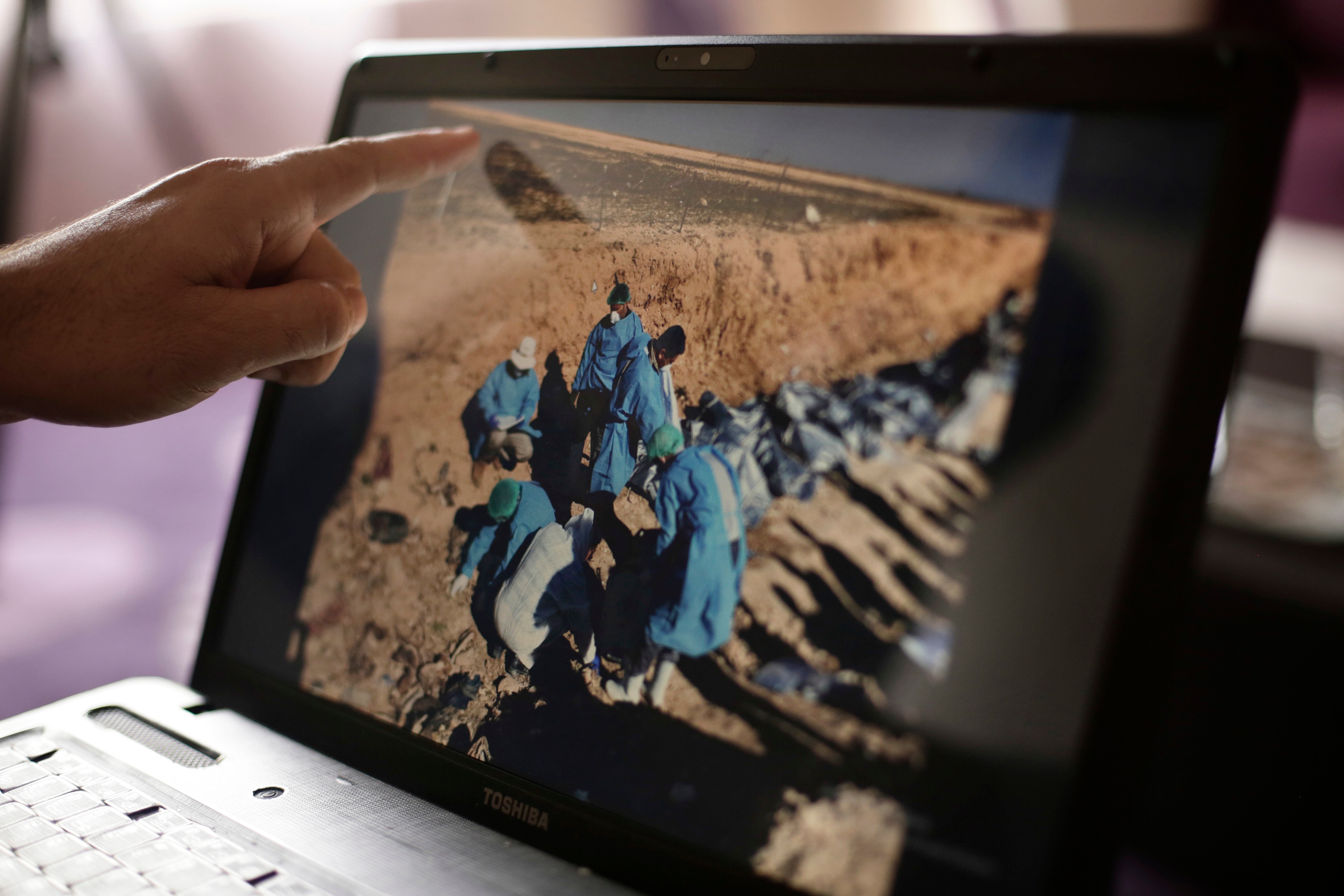 In this May 17, 2016, file, photo, Sirwan Jalal, Director of Mass Graves for the Kurdish Regional Government, points to an image of the site of a mass grave during an interview with the Associated Press in Irbil, northern Iraq. U.N. investigators said Tuesday, Nov. 6, 2018 that they have verified the location of more than 200 mass grave sites from the time of the Islamic State group’s reign in northern Iraq, containing the bodies of between 6,000 and 12,000 victims. (AP Photo/Maya Alleruzzo, File)

BAGHDAD — More than 200 mass graves containing between 6,000 and 12,000 bodies have been found in Iraq from the time of the Islamic State group’s three-year reign, United Nations investigators said Tuesday.

The 202 graves verified by investigators dot northern Iraq and are a “legacy of ISIL’s terror,” according to a joint report by the U.N. mission to Iraq and the U.N. office for human rights. Findings from the gravesites can be used as evidence of the group’s crimes, they said.

The graves date from 2014 to 2017 when the militant group, sometimes known by the acronym ISIL, ruled some of Iraq’s largest cities and towns.

As the militants swept through Iraq and neighboring Syria, they killed captured members of the security forces en masse, expelled or killed minorities, and enslaved women from the Yazidi sect. The UN says the widespread violations could amount to genocide.

Several graves found in Iraq’s Salahuddin province contain the remains of victims of the 2014 Camp Speicher massacre, when the militants killed around 1,700 Iraqi security forces and army cadets. 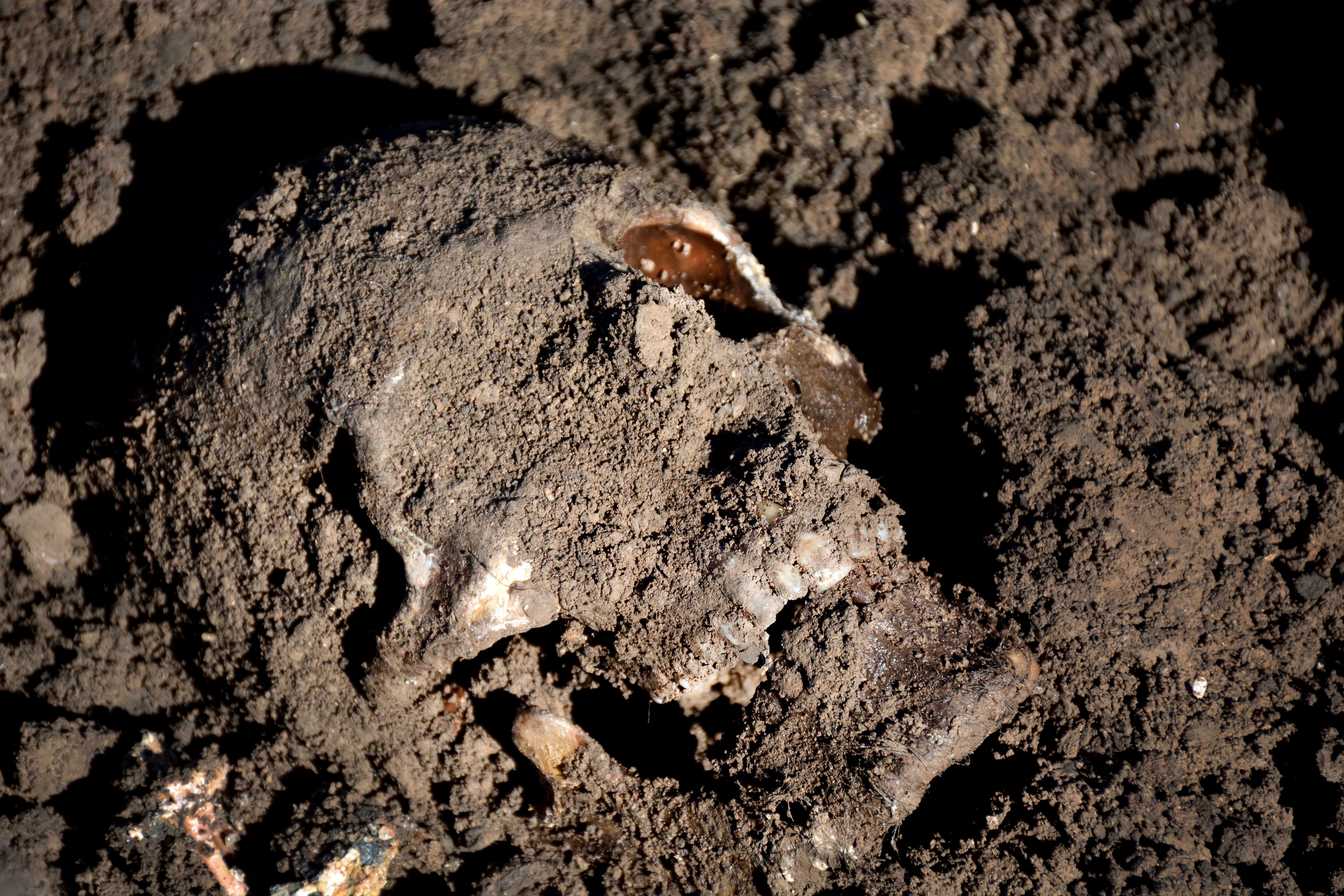 This image May, 2015, file, photo released by the the Mass Graves Directorate of the Kurdish Regional Government shows a human skull in a mass grave containing Yazidis killed by Islamic State militants in the Sinjar region of northern Iraq. U.N. investigators said Tuesday, Nov. 6, 2018 that they have verified the location of more than 200 mass grave sites from the time of the Islamic State group’s reign in northern Iraq, containing the bodies of between 6,000 and 12,000 victims. (Kurdish Mass Graves Directorate via AP, File)

In some cases, the militants dropped their victims or the bodies of their victims in wells or sinkholes instead of digging graves. Investigators said there could be thousands of bodies in the Khasfa sinkhole south of Mosul, the largest city once under IS control.

Iraqi authorities have exhumed the remains of 1,258 victims from 28 graves, according to the UN It urged authorities to identify the remains of all gravesite victims and seek justice for families. It said bodies should be preserved and returned to families.

Iraq’s Mass Graves Directorate and Martyrs’ Commission could not be reached for immediate comment.

Iraq declared victory over IS in December last year. But the militants still control pockets of territory just across the border in Syria and continue to claim responsibility for abductions and bomb blasts around the country.  /kga