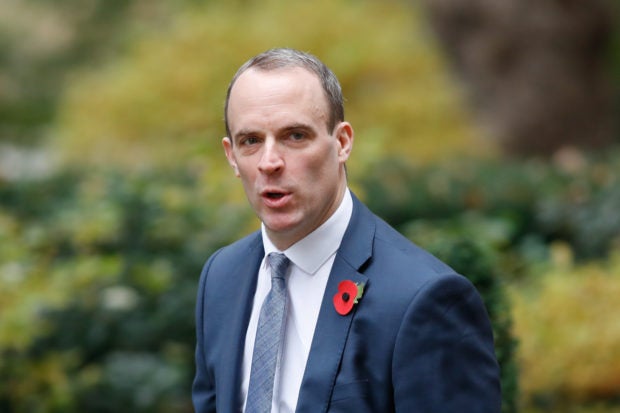 Britain’s Secretary of State for Exiting the European Union (Brexit Minister) Dominic Raab arrives to attend the weekly meeting of the cabinet at 10 Downing Street in London on November 6, 2018.  AP

LONDON, United Kingdom — Companies linked to a leading pro-Brexit donor are being fined a total of  $176,000 for data protection breaches during Britain’s 2016 referendum, officials said on Tuesday.

The Leave.EU campaign, bankrolled by businessman Arron Banks, used the personal data of customers of an insurance company owned by the businessman to send them political marketing material unlawfully.

The Information Commissioner’s Office (ICO) regulator said it had issued a notice of intent to fine Leave.EU and Eldon Insurance, trading as GoSkippy,  $78,000 each for “serious breaches” of electronic marketing law.

“More than one million emails were sent to Leave.EU subscribers over two separate periods which also included marketing for GoSkippy services, without their consent,” in a breach of regulations, the ICO said.

The ICO also intends to fine Leave.EU a further £15,000 for a “separate, serious breach” after almost 300,000 emails were sent to Eldon Insurance customers containing a Leave.EU newsletter.

It said it was also investigating allegations that Eldon shared customer data obtained for insurance purposes with Leave.EU.

Banks played down the announcement.

“The ICO find no evidence of a grand data conspiracy and find we may have accidentally sent a newsletter to customers,” he said on Twitter.

“Gosh, we communicated with our supporters and offered them a 10 percent Brexit discount after the vote! So what?”
Vote Leave was the official pro-Brexit campaign in Britain’s 2016 referendum on its European Union membership, in which 52 percent backed quitting the bloc. Leave.EU was the biggest unofficial campaign.

Since then, Banks has faced questions about his tactics and finances in the referendum.

It was announced last week that the National Crime Agency is probing his alleged use of offshore companies to finance Leave.EU.

Information Commissioner Elizabeth Denham has been probing the use of data analytics for political purposes.

Giving evidence to the parliamentary inquiry into disinformation and fake news on Tuesday, Denham voiced “concerns about ongoing misuse of personal data” at Leave.EU and Eldon Insurance.

“We need to look at whether the processes are working to be able to separate the data from political campaigning and from insurance use,” she said.

“The sharing of information has gone both ways” at Banks’ businesses, she added, and “the fines could be significantly higher” if further “misdeeds” were uncovered. /ee