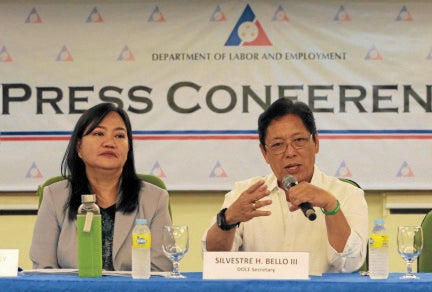 BALANCING ACT Labor Secretary Silvestre Bello III says the regional wage board arrived at the increase in the floor pay for workers in Metro Manila by balancing the interests of employees and employers. —GRIG C. MONTEGRANDE

The Department of Labor and Employment (Dole) announced on Monday a P25 increase in the minimum daily wage of workers in Metro Manila, an amount that labor groups called mere “crumbs.”

Employers also grumbled, saying the amount would increase the cost of doing business in the Philippines and harm the country’s competitiveness.

The Associated Labor Unions-Trade Union Congress of the Philippines (ALU-TUCP) said the government’s failure to grant a significant wage hike could result in an increase in the number of strikes.

Under Wage Order No. NCR-22, the new minimum daily wage in Metro Manila will be P537 for workers in the nonagriculture sector, and P500 for those in the agriculture sector and those in retail, service and manufacturing establishments that have less than 10 workers.

The order, expected to take effect as early as Nov. 21, integrates the existing P10 cost of living allowance, which employers have the discretion to give to workers.

“It would appear that the actual wage increase is only P15. What P15 can buy is a single purchase of instant noodles. Ecop (Employers’ Confederation of the Philippines) and Dole are heartless,” Anakpawis Rep. Ariel Casilao said.

“The P25 [increase] cannot compensate for the runaway inflation in Metro Manila and the stagnation of the real wage, despite the 50-percent productivity growth from 2001 to 2016,” he said.

Like Partido Manggagawa, wage petitioner ALU-TUCP said the wage increase was “too small” that it “has no impact to lift workers and their families out of poverty.”

ALU-TUCP sought a P320 wage increase in June, which it increased to P344 last month to help workers recover their purchasing power as inflation continued to rise.

The inflation rate hit a nine-year high of 6.7 percent in September.

Sy said the P25 was “backed up by simulations.”

Any amount higher than that “could be a potential source of secondary inflationary effects,” she said.

It was the same line taken by the Management Association of the Philippines (MAP), which said the wage increase would add pressure to the already high inflation.

Eduardo Yap, chair of MAP’s national issues committee, said the increase would also harm the competitiveness of the country.

“Raising wages will provide only temporary relief, whatever the amount. Manufacturers and traders will soon raise prices in response to higher cost, and inflation will continue to rise in a never-ending cycle to the detriment of consumers,” Yap said.

Edgardo Lacson, acting president of the Philippine Chamber of Commerce and Industry, said the increase should have only been P20 per day, based on the fluctuation of the consumer price index.

“Employers will comply but those who cannot afford can file for a one-year exemption,” said Lacson, who is also chair of Ecop.

Malacañang will respect the P25 wage increase, according to presidential spokesperson Salvador Panelo.

Labor Secretary Silvestre Bello III confirmed on Monday that minimum wage earners in Metro Manila would receive a P25 adjustment in their daily pay as earlier revealed by Ecop.

Bello said the seven-member RTWPB in Metro Manila arrived at P25 by “balancing the needs of workers and their families with the capacity of enterprises to pay the additional labor costs without impairing business.”

For labor group Sentro, the adjustment given by the RTWPB did not come as a surprise as it pointed out that the board had always followed the government’s “cheap labor policy.”

Magtubo favored abolishing the regional wage boards for their failure to look after the workers’ welfare. —WITH REPORTS FROM JULIE M. AURELIO, LEILA B. SALAVERRIA AND VINCE F. NONATO

Read Next
Many Democrats anxious as they are hopeful about midterm elections
EDITORS' PICK
Legislators among those linked to corruption, says DOJ chief
WHO: Keep guard up even with COVID-19 vaccine nearing rollout
Manufacturing heavyweights weigh in on post-pandemic transportation, logistics, and supply chain in Cisco Live Series
Speed of COVID-19 vaccine development an extraordinary feat
Smart celebrates the Season of Giving with GIGAMANIA
No. 1 smartphone brand realme Philippines, enters postpaid market with first 5G smartphone
MOST READ
‘This is highway robbery:’ Valenzuela mayor shows traffic jam due to RFID payment system
Legislators among those linked to corruption, says DOJ chief
Son of slain peace consultants has message to Sinas
PH going back to ECQ this Christmas season? IATF says it’s fake news
Don't miss out on the latest news and information.