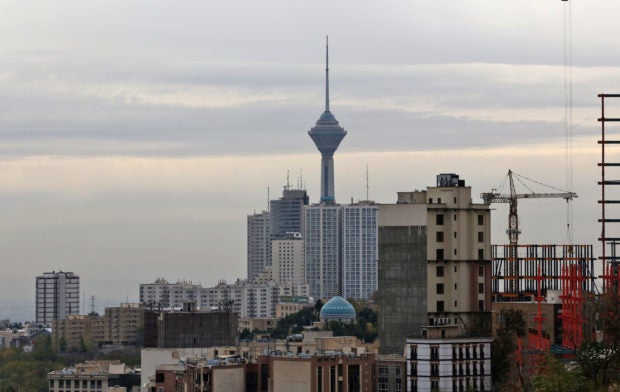 A general view of the Iranian capital Tehran and the Milad tower on November 5, 2018. AFP

TEHRAN, Iran — A defiant Iran said it will “proudly bypass” sanctions by the United States that took effect on Monday targeting the Islamic republic’s vital oil and financial sectors.

The measures described by Washington as “the toughest sanctions ever” come six months after US President Donald Trump’s controversial decision to abandon the multi-nation nuclear deal with Tehran.

“I announce that we will proudly bypass your illegal, unjust sanctions because it’s against international regulations,” Iran’s President Hassan Rouhani said in a televised speech.

“We are in a situation of economic war, confronting a bullying power. I don’t think that in the history of America, someone has entered the White House who is so against law and international conventions,” he added.

In one of Tehran’s bazaars, there was anxiety over the future.

“The shadow of the sanctions has already affected the economy in a disastrous way, people’s purchasing power has plunged,” said Ehsan Attar in his herbal remedy shop.

“The US is just like a bully, as long as you listen to them they leave you alone, otherwise it will try to suffocate you.”

Trump has made Iran a foreign policy priority since taking office, accusing it of spreading terror and seeking to destabilise the Middle East.

He detested the nuclear pact forged by his predecessor Barack Obama and five other world powers, finally deciding to abandon it in May.

‘Act on your commitments’
Trump says he wants a new deal that curbs Iran’s missile program and interventions around the Middle East — demands that have been flatly rejected by Tehran.

“Constantly they are sending us messages saying ‘Let’s sit and negotiate.’ Negotiations for what?” said Rouhani.

“First, you respect the negotiations we already concluded, so that there are grounds for the next negotiations.”

Rouhani said four countries had approached him during his visit to New York for the UN General Assembly in September, offering to mediate with the US but he turned them down.

The latest tranche of US sanctions aims to significantly cut Iran’s oil exports — which have already fallen by up to one million barrels a day since May — and cut off its banks from international finance.

Although the US has given temporary exemptions to eight countries — including India, Japan and Turkey — to continue buying oil, it aims to push Iran’s sales to zero.

“Watch what we do. Watch as we’ve already taken more crude oil off the market than any time in previous history,” US Secretary of State Mike Pompeo told CBS on Sunday.

The other parties to the nuclear deal — Britain, France, Germany, China and Russia — have vehemently opposed the US move and vowed to keep alive the accord, technically known as the Joint Comprehensive Plan of Action (JCPOA).

“We will do everything necessary in the interests of preserving and expanding international trade, economic and financial cooperation with Iran despite US sanctions,” said Russia’s foreign ministry.

Iran’s Foreign Minister Mohammad Javad Zarif tweeted that “US bullying is backfiring, not just because JCPOA is important, but because the world can’t allow Trump & Co. to destroy global order.”

The only support for the US position has come from Iran’s regional rivals, notably Saudi Arabia and Israel, with the latter saying sanctions were “the sea-change the Middle East has been waiting for.”

But Iran’s economy was already suffering major structural problems — including widespread corruption, weak investment and a banking sector laden with toxic assets — before Trump walked out of the deal.

His move helped fuel a run on Iran’s currency that has seen the rial lose more than two thirds of its value, driving up prices and forcing the government to resort to food handouts for the country’s poor.

Rouhani’s plan since taking power in 2013 was to boost the economy by rebuilding ties with the world and attracting billions of dollars in foreign investment — a strategy that now looks in tatters.

Foreign companies and banks are largely unwilling to make enemies of the US Treasury, and most international firms that set up in Iran after the 2015 deal have been forced to leave, including France’s Total, Peugeot and Renault, and Germany’s Siemens.

“Unfortunately, we were treated dishonourably by both the American and Iranian governments,” said Fereshteh Safarnezhad, a 43-year-old teacher, on the streets of Tehran.

“The Americans never really committed to the deal and the Iranian government did not spend the cash it got from the deal on the people.” /ee