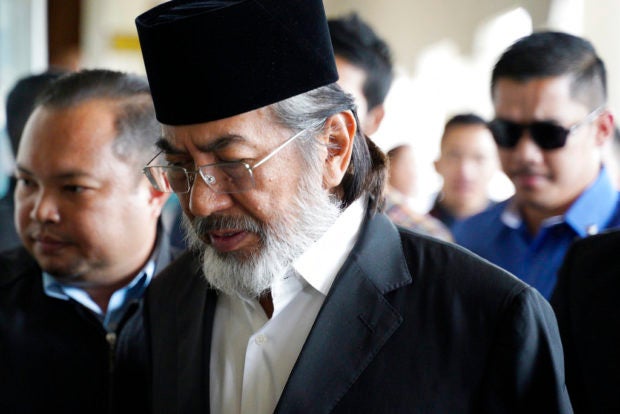 KUALA LUMPUR, Malaysia — The former leader of a resource-rich eastern Malaysian state was charged Monday with allegedly receiving bribes for the award of timber concessions amid a widening crackdown on abuse by former officials.

Musa Aman, who was chief minister of Sabah state on Borneo island since 2003 until the ouster of scandal-tainted Prime Minister Najib Razak’s government in May’s general election, is the latest high-ranking official to be prosecuted.

Musa, 67, was detained Monday by the anti-graft agency before being taken to court.

He pleaded not guilty to 35 counts of corruption for allegedly receiving a total of $63.3 million in Hong Kong and Singapore through proxies between 2004 and 2008 in exchange for timber contracts. He was released on bail and faces up to 20 years in jail for each offense.

Sabah and neighboring Sarawak on Borneo are rich in natural resources such as oil, gas and timber but are among the poorest states in Malaysia.

Najib, his wife, his former deputy and two other ex-senior government officials were earlier charged with corruption and the government has warned that more may be hauled to court.

Read Next
Jailed Myanmar Reuters reporters file appeal
EDITORS' PICK
Nestlé Philippines’ ‘NESCAFÉ Plan’ bags Grand Anvil at PRSP 56th Anvil Awards
822 NPA-free barangays set to get P20-M gov’t aid — Esperon
Pope Francis to meet top cleric Sistani on second day in Iraq
Don’t waste the hope of vaccines, warns WHO
Every Filipino home can now be a smart home with realme TechLife
Smart reinforces superiority with best speed and mobile video experience in PH
MOST READ
So: I lacked connections to succeed in PH ‘culture’
Robredo on Sara Duterte leading poll surveys: Why are Filipinos drawn to leadership of this kind?
US weapons, hardware in exchange for VFA
US lays out list of aid to ‘satisfy’ Duterte following VFA payment demand
Don't miss out on the latest news and information.