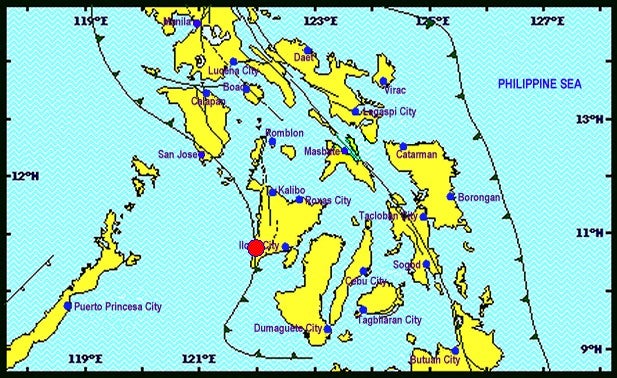 A series of mild earthquakes hit Panay Island within hours of each other on Monday morning, the Philippine Institute of Volcanology and Seismology (Phivolcs) said.

The first and stronger earthquake that measured at magnitude 4.7 hit at 7:45 a.m. and had its epicenter 8 kilometers (km) southeast of San Jose, Antique.

The temblor was felt at Intensity III in Iloilo City, Phivolcs said.

It was tectonic in origin and had a depth of 8 km.

A minute later, a weaker quake with a magnitude 4.0 hit 2 km northwest of Sibunag, Guimaras, the Phivolcs reported.

Also of tectonic origin, the quake had a depth of 3 km.

Phivolcs said that the quake was felt at Intensity IV in Iloilo City.

That quake was recorded at Intensity IV in Iloilo City and San Jose de Buenavista in Antique; Intensity III in Roxas City, Dao in Capiz and Belison in Antique; and Intensity II in Cadiz in Negros Oriental and President Roxas in Capiz.

It was also of tectonic origin and had a depth of 3 km.

Phivolcs said no damage or aftershocks were expected from all earthquakes. /cbb