MELBOURNE — An Australian nun who lost a long legal battle with Manila to stop her deportation attacked President Rodrigo Duterte’s “reign of tyranny” as she returned home on Sunday.

Sister Patricia Fox, 71, who spent almost three decades working with Philippine laborers, farmers and urban poor, was accused of illegally engaging in political activism as the President’s administration cracked down on foreign critics on its soil.

Fox apparently angered the President by joining a fact-finding mission in April to investigate alleged abuses against farmers, including killings and evictions by soldiers fighting guerrillas in Mindanao.

Welcomed by supporters at Melbourne Airport, Fox told reporters she was happy to be home but had found it hard to leave the Philippines.

“At present, in the Philippines, the human rights abuses are just increasing and it is a reign of tyranny at present,” Fox said.

“There has been a culture of impunity for a long time and it is getting worse,” she said.

Sought for comment, presidential spokesperson Salvador Panelo denied Fox’s claim of a reign of tyranny in the Philippines.

“There is only a reign of strict enforcement of laws. The reign of terror is in the minds of those who violate the laws because they are terrified that the law is running after them,” Panelo said.

Fox had been arrested briefly on charges of violating her visa’s terms against activism in the Philippines and the slow turning wheels of the country’s bureaucracy began moving to strip her of her papers. 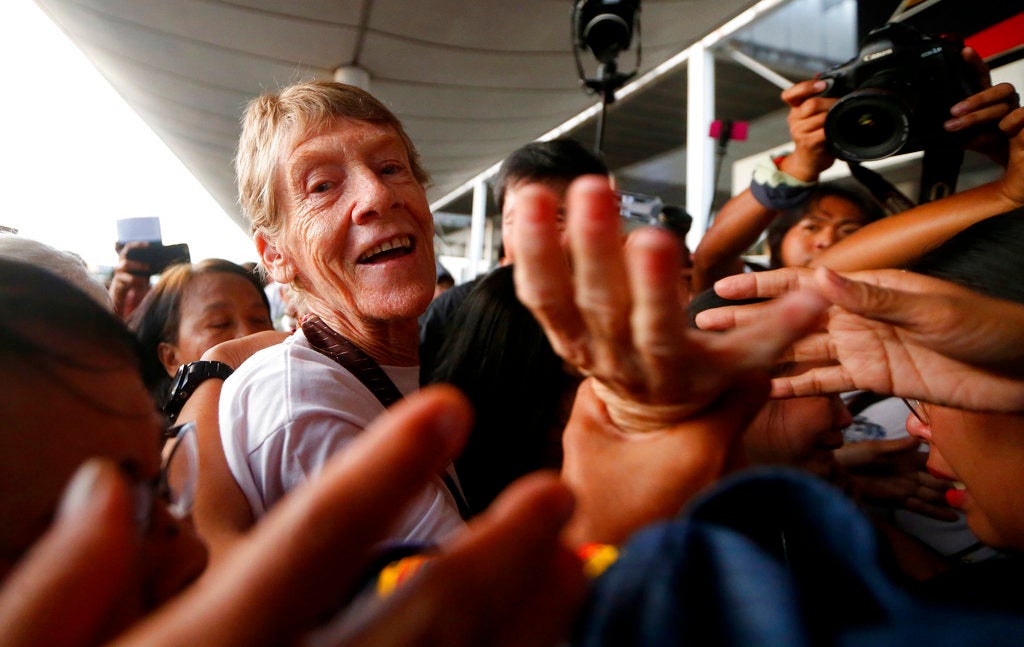 Australian Roman Catholic nun Sister Patricia Fox reaches out to bid goodbye to supporters as she is escorted to the Ninoy Aquino International Airport for her flight to Australia Saturday, Nov. 3, 2018, in Manila, Philippines. Sister Fox decided to leave after 27 years in the country after the Immigration Bureau denied her application for the extension of her visa. Sr. Fox called on Filipinos to unite and fight human rights abuses ahead of her forced departure from the country. (AP Photo/Bullit Marquez)

Last week, they refused to extend her visa and ordered her out by Saturday.

Fox decided to return to Australia rather than risk being forcibly removed.

She left the Philippines on Saturday night.

Church figures have previously criticized the President’s policies, particularly his signature war on drugs that has left almost 5,000 people dead since he took office in 2016.

Human rights groups charge that the actual death toll is about five times that total.

Speak up, bring about change

At a farewell news conference in a Catholic school in Manila on Friday, Fox called on Filipinos to speak up and help the marginalized fight to gain land, houses and jobs.

“The big challenge now is not to lose hope, to know that if we all move together, we can bring about change,” Fox said.

“Pope Francis said that if you’re a Christian and there’s massive human rights violations . . . you should take action, make noise. Where the oppressed are, the church people should be there, not only always talking but with them and hopefully more vocal,” she said.

Fox told The Associated Press (AP) by phone that the President’s war on drugs was “horribly barbaric” and she vowed to return to the Philippines if allowed to resume her 27 years of missionary work for the poor.

“I know a lot of mothers, wives who have lost someone. You have no right to take a life just like that without justice,” Fox said.

Dozens of activists, laborers, priests, nuns and tribal people, some in tears, thanked Fox by celebrating Mass in her honor before sending her off.

A lawyers’ group backing Fox, the National Union of Peoples’ Lawyers, said that by persecuting a frail and low-key missionary, the President had turned her into an “overnight rock star.”

Known for being soft-spoken, Fox is a coordinator of the Congregation of Our Lady of Sion, a Roman Catholic order of nuns, and has worked for the poor in the Philippines.

She promotes human rights and the welfare of workers, farmers and ethnic groups and has spoken against Mr. Duterte and his administration, which has also been criticized for stifling dissent.

In Melbourne, Fox recalled that after she had spoken publicly in support for Coca-Cola workers seeking benefits in the Philippines, their picket was “broken up brutally, 10 of them were arrested and were five days in jail and not charged.”

The Bureau of Immigration said Fox violated her missionary visa by venturing far beyond her community in Quezon City and interfered in domestic politics by joining protests and news conferences that tackled “political and human rights issues against the government.”

Fox’s lawyers said she joined the marginalized as part of her missionary work and called the Duterte administration’s actions “political persecution.”

They expressed fears that the move to evict Fox could undermine the crucial civic and religious work of foreign missionaries in the country.

Aside from Fox, the Duterte administration has separately blocked a critical Italian politician, Giacomo Filibeck, and another Australian, Gill Hale Boehringer, from entering the Philippines this year.

“The law is clear: The entry and admission of an alien is a matter of privilege, and not a right,” Dana Sandoval, a spokesperson for the immigration bureau, said on Saturday. —Reports from AFP, AP and Julie M. Aurelio