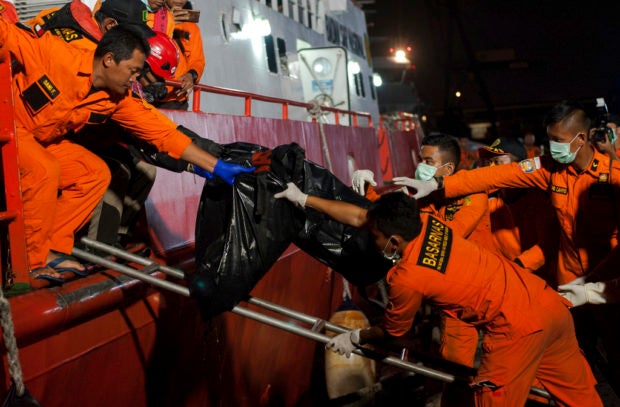 Rescuers hand body bags containing the remains of the victims of the crashed Lion Air jet to colleagues upon arrival at Tanjung Priok Port in Jakarta, Indonesia on Nov. 3, 2018. AP

JAKARTA, Indonesia  — Indonesian authorities have extended the search for victims of the Lion Air crash and the plane’s cockpit voice recorder.

National Search and Rescue Agency chief Muhammad Syaugi said Sunday the search involving hundreds of personnel and dozens of ships would continue for another three days.

The Lion Air jet crashed just minutes after takeoff from Jakarta on Monday, killing all 189 people on board. More than 100 body bags of human remains have been recovered.

Syaugi says weak signals, potentially from the cockpit voice recorder, were traced to a location but an object hadn’t been found yet due to deep seabed mud.

Syaugi says a considerable amount of aircraft “skin” was found on the seafloor but not a large intact part of its fuselage as he’d indicated Saturday was possible. /ee