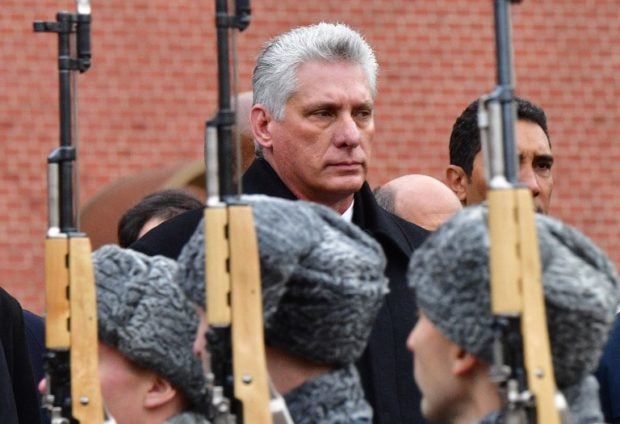 Cuban President Miguel Diaz-Canel attends a wreath laying ceremony at the Tomb of the Unknown Soldier by the Kremlin wall in Moscow on November 2, 2018. (Photo by Mladen ANTONOV / AFP POOL / AFP)

SEOUL — Cuban President Miguel Diaz-Canel was due in Pyongyang on Sunday, North Korea’s state media reported, describing the visit as a “historic event” highlighting the “invincible friendship” of the two allies.

The visit comes amid stalled talks between North Korea and the United States and only days after Washington imposed fresh economic restrictions on Cuba.

Washington’s ties with Havana were fully restored in 2015 after more than half a century of enmity, but have deteriorated since President Donald Trump took office.

Communist Cuba is one of North Korea’s few remaining allies.

“His current visit… is a historic event which powerfully demonstrates invincible friendship and unity and comradely friendship,” it added.

The paper featured a separate profile and photo of Diaz-Canel, who took office in April in a historic transition of power on the Caribbean island, succeeding Raul Castro, who took over from his elder brother Fidel, father of the 1959 revolution.

No further details were given on the itinerary of his visit.

North Korea sent a delegation led by Choe Ryong-Hae, a senior aide to its leader Kim Jong Un, to Havana for Castro’s funeral.

Cuba in the past has flouted international sanctions imposed on North Korea over its nuclear weapons programme.

North Korea insisted the weapons were being shipped for repair, prior to their return.

Read Next
Greek police arrest man who had the top of an ancient column
EDITORS' PICK
BuCor eyes building national prisons in all 17 PH regions
The Best Tech Gifts For The 2022 Holidays
House energy committee chair Arroyo bats for cheap electricity
No RITM layoffs amid push for new center
Abalos vows to fill jails with drug pushers
vivo’s coming to town to grant wishes with more holiday promos
MOST READ
LOOK: Vhong Navarro transferred to BJMP detention facility in Taguig
The Elephant Man in the Senate
Posh village as ‘shabu’ haven
LOOK: Zanjoe Marudo bonds with Ria Atayde, her family
Don't miss out on the latest news and information.