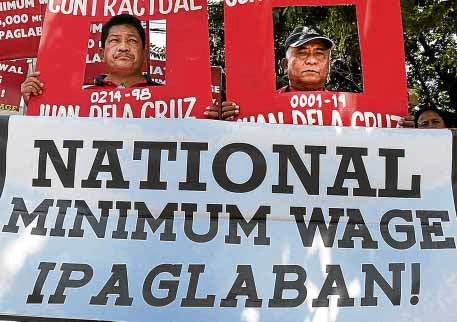 RALLY FOR NAT’L BASIC PAY Workers stage a rally in Quezon
City to demand a national minimum wage of P16,000 monthly
and to call for an end to contractualization. —GRIG C. MONTEGRANDE

Malacañang assured the public on Thursday that the government would consider the interests of both employers and workers in any decision on the petition to increase the minimum daily wage in Metro Manila.

Presidential spokesperson Salvador Panelo pointed out that the P25 reported wage hike announced by some groups was still unofficial.

“The reported P25 wage hike for minimum wage workers has yet to be approved by the National Wages and Productivity Commission,” Panelo said in a statement.

“Therefore, the figure being disseminated is not official,” he added.

Panelo made the remarks after labor groups urged President Duterte to approve a higher amount for the proposed wage hike, amid reports that the approved daily increase was only P25.

The P25 will be on top of the current P512 minimum daily wage that workers are receiving in Metro Manila.

The labor group Partido Manggagawa (PM) called the P25 wage hike a “Halloween trick that will result in a ‘libing’ (burial) wage instead of a living wage.”

“Whether P20 or P25, the wage hike for NCR (National Capital Region, or Metro Manila) workers is an epic fail and falls below all expectations by workers,” said PM spokesperson Wilson Fortaleza.

The group’s cost of living estimate for a family of five in the metropolis is around P1,300 a day, more than double the current minimum daily wage of P512.

“First, P25 is short by 30 percent to make up for the P35.84 erosion in wages due to the 7-percent inflation in the NCR recorded in August this year. This means real wages or the amount of goods and services that workers can buy has fallen even with a wage hike,” Fortaleza said.

“Second, employers still owe workers for the stagnation in real wages despite the 50-percent productivity growth from 2001 to 2016. Even if the NCR wage board had ordered a P35.84 wage hike, it still means real wages are just frozen,’’ he added.

Fortaleza said workers should enjoy a just share in the fruits of production as mandated by the Constitution.

“Finally, President Duterte has broken his promise to abolish what he calls provincial wages. Instead, his administration is reaffirming the disastrous policy of wage regionalization,” the PM spokesperson added.

Nagkaisa called on workers to organize into unions to fight for higher wages.

The Trade Union Congress of the Philippines (TUCP) on Wednesday called the increase “meaningless” and a “measly token” that was not enough to catch up with the spiraling prices of basic goods.

The Associated Labor Unions is seeking a P344 increase in Metro Manila to help workers recover the purchasing power lost to inflation, which rose to 6.2 percent in the third quarter.

Prices of goods and services rose further to a nine-year high of 6.7 percent nationwide in September, eroding the purchasing power of workers some more.

Among the regions, Bicol registered the highest inflation rate in September at 10.1 percent.

Inflation in Metro Manila eased to 6.3 percent in September from the 7.0 percent in August.

Concerns of both sides

Higher prices, especially those for food, hurt the poor more because 60 percent of their budget is spent on food, according to economists.

Malacañang said the government was taking into consideration the concerns of both sides in deciding on the petitions for a minimum wage increase.

“The Palace assures everyone that the interests and well-being of both sides, management and labor, as well as the overall impact on our domestic economy, would be considered by the government in attending to this matter,” Panelo said.

He maintained that Malacañang was leaving it to the regional wage boards to decide the petitions to increase the minimum wage and balance the needs of all parties involved.

“If the situation is good, maybe the laborers would be given half or one-fourth of the wage increase they are asking for,” Panelo later said in a radio interview on Thursday.

He added: “There’s a need to strike the balance… you increase salaries, the companies might fold up, and the workers might lose their jobs.” —REPORTS FROM TINA G. SANTOS AND JULIE M. AURELIO