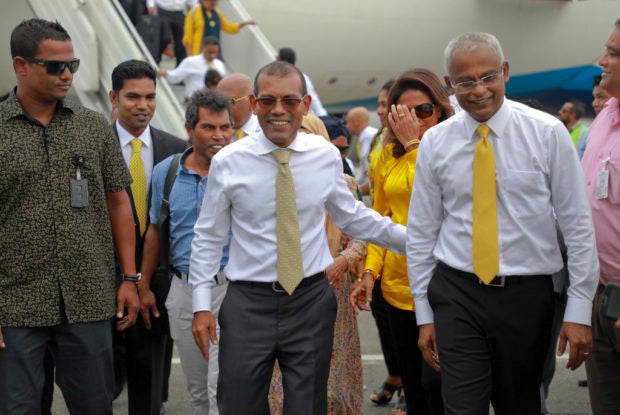 MALE, Maldives — The first democratically elected president of the Maldives returned home Thursday after more than two years in exile to escape a long prison term.

The plane carrying Mohamed Nasheed from Sri Lanka landed in Maldives’ capital, Male, where he was welcomed by his party members and supporters. He planned to address his supporters later Thursday.

Nasheed was sentenced to 13 years in jail in 2015 after being convicted of terrorism for ordering the arrest of a top judge in 2012 while he was president. His trial was criticized internationally for lack of due process, along with those of many other political opponents jailed by strongman President Yameen Abdul Gayoom’s administration.

He was offered asylum in Britain when he traveled there for medical treatment on leave from prison.

Since Yameen’s defeat, courts have freed or granted bail to some of the jailed officials.

The Supreme Court earlier this week suspended Nasheed’s prison sentence until it reviews his conviction at the request of the country’s prosecutor general, a move to prevent his arrest on arrival.

Two other people — an opposition party leader and a former vice president who was Yameen’s running mate in the 2103 presidential election — earlier returned from exile.

Nasheed, a former pro-democracy activist, was elected president in the country’s first multiparty election in 2008 after decades of autocratic rule. He became popular internationally as an environment crusader, holding an underwater Cabinet meeting to highlight the perils of rising sea levels caused by global warming and their impact on the archipelago nation composed of coral masses just a few meters (feet) above sea level.

He resigned in 2012 amid public protests against his order to arrest the senior judge and lost the 2103 election to Yameen. /kga