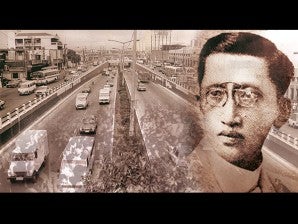 LITTLE-KNOWN. Filipino genius Epifanio delos Santos and the famous thoroughfare (circa 1987) named after him.

If it were not for the unbending determination of Filipino intellectuals in 1958, Epifanio de los Santos Avenue (or Edsa) might well have been named “Avenida 19 de Junio.”

Or “President Ramon Magsaysay Avenue.” Or “Gen. Douglas MacArthur Highway.” And if Edsa were not named Edsa, what would we have called the People Power Revolution of 1986?

But who is Epifanio de los Santos, anyway?

Despite his obscurity today, De los Santos (or “Don Panyong”) was regarded by some of his peers as the greatest Filipino genius after national hero Jose Rizal. Noted historian Gregorio Zaide described him as a rare genius because of his encyclopedic knowledge and talents.

He is regarded as the “first Filipino academician,” and few scholars of his time could match his vast knowledge of the Philippines.

He died in 1928 at the age of 57 and was honored as “the great among the great Filipino scholars.”

But despite his love for the Spanish language, De los Santos was a fiery patriot who championed Philippine independence through journalism. He became associate editor of the influential revolutionary paper, La Independencia, in 1898, using the pen name G. Solon.

De los Santos also wrote extensively in Tagalog. He was a member of an eminent group of scholars called the Samahan ng mga Mananagalog, which was founded by Felipe Calderon in 1904.

As a politician, De los Santos was a member of the Malolos Congress. He served as district attorney of Nueva Ecija, his father’s province, and was its first governor in 1902—a post to which he was reelected in 1904.

After his term as governor, he was appointed provincial fiscal of Bulacan and Bataan.

In 1907, he wrote an essay with the interesting title, “Fraudes electorales y sus remedios” (Electoral fraud and its remedies) for the Philippine Assembly.

In 1918, De los Santos was appointed technical director of the Philippine Census.

His last and most significant government position was as director of the Philippine Library and Museum, to which he was appointed in 1925.

By tradition, this prestigious post was reserved for Filipinos of learning and scholarship. As head of the museum, De los Santos built up its collection of paintings, sculptures and other art forms to an extent that his contributions exceeded those of his predecessors.

He was still museum director when he died from a stroke in 1928.

The construction of the North and South Circumferential Road that Commonwealth President Manuel L. Quezon envisioned as the Philippines’ most beautiful highway began in 1939.

For reasons that remain unclear, however, the Americans renamed this road “Highway 54” after World War II.

In 1959, by virtue of Republic Act No. 2140, Highway 54 was renamed “Epifanio de los Santos Avenue (Edsa),” in recognition of Don Panyong’s genius and contributions to the country’s intellectual and artistic heritage.

But it was not the favorite choice for Highway 54’s new name. There were three other formidable alternatives: “Avenida 19 de Junio” (in honor of Rizal’s birthday); “President Ramon Magsaysay Avenue” (in memory of the beloved president who died in 1957) and “Gen. Douglas MacArthur Highway” (for the American officer who led US forces in liberating the Philippines from Imperial Japan in World War II).

Compared to these great men, De los Santos was the dark horse in the race.

Eulogio “Amang” Adona Rodriguez, who served as De los Santos’ assistant at the Philippine Library and Museum, vigorously spearheaded the campaign to rename Highway 54 in honor of the latter. (Rodriguez would later become Senate president.)

After Rodriguez’s death, Juan Francisco Sumulong, who was De los Santos’ classmate at the Santo Tomas Law School, took up the campaign.

It was a triumph for the Filipino intellectual.

Edsa today is the Philippines’ most historic highway. Its name is inextricably linked to the People Power Revolutions that restored democracy in 1986 (or Edsa I), and ousted then President Joseph Estrada in 2001 (or Edsa II).

The main circumferential highway in Metro Manila, it runs some 24 kilometers (or 15 miles) from Caloocan City in the north to Pasay City in the south.

Edsa is a 10-lane expressway that also encompasses the Metro Rail Transit (MRT) Line 3 extending from Taft Avenue in the south to Monumento in the north by 2011. It forms the major portion of the Circumferential Road 4 (C-4) in Metro Manila and arcs in a semicircle through the cities of Pasay, Makati, Mandaluyong, Quezon City and Caloocan.

In August 2009, Sen. Mar Roxas proposed that Edsa be renamed “Cory Aquino Avenue,” in honor of the woman who led the struggle to oust the dictator Ferdinand Marcos and became the Philippines’ first woman president.

According to Roxas, “it is but fitting to offer in her memory the road that had made her famous all over the world.” But he subsequently withdrew his proposal without explanation.

Now we have a bill filed in the House of Representatives by Bohol Rep. Rene Lopez Relampagos that again seeks to rename Edsa Cory Aquino Avenue.

Whether the measure will pass muster is unclear at this time. But it will do well for Congress to consider who De los Santos was, and why naming Metro Manila’s longest highway after him honors the Filipino as an intellectual.

(Editor’s Note: The author is a regular contributor to the Inquirer and a historian of the Korean War. Among his stories published in this newspaper is one about the P500 bill being a memorial to the Philippines’ involvement in that war. His Korean War website is at www.peftok.blogspot.com.)