A Facebook post claiming that drug money was donated to the campaign of former Interior Secretary Manuel “Mar” Roxas II and Vice President Leni Robredo in  the 2016 elections is fake, the Agence France Presse (AFP) reported on Wednesday.

The viral post stated that  a ledger from a political family— the Parohinog family—  was retrieved during a police operation in the city of “Ozamis.”

It further claimed that the ledger showed that the Ozamis-based family had donated P26 million to the Roxas-Robredo campaign. It also cited Ozamis Police Supt. Ernesto Macabebe as the main source of the report. 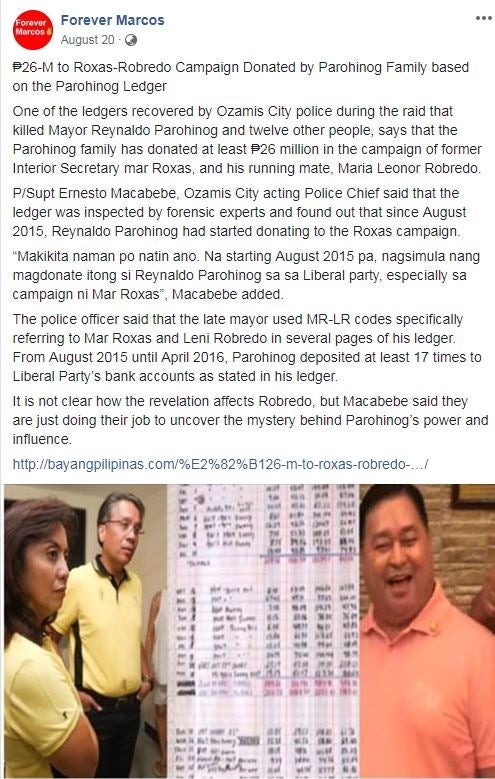 The AFP, however, debunked the information, saying that “Ozamis City” and the “Parohinog family” do not exist in government records. However, Ozamiz City and its former mayor Reynaldo Parojinog exist and that a drug trade happened last 2017, which killed 12 people, including Parajinog.

The AFP also confirmed from Benigno Durana, Philippine National Police Police (PNP) spokesperson, that Macabebe is not in the PNP’s list of officers.

“As per the personnel accounting information system of the directorate for personnel and records management, there was no record of Police Superintendent Ernesto Macabebe in the PNP roster,” Durana said.

The said ledger was also fake, according to former Ozamiz police chief Jovie Espenido. “I did not obtain that particular ledger,” Espenido told AFP.

In an official list obtained by AFP, the Parojinogs were not included among the donors to Robredo’s campaign fund in 2016. They were also not listed as the campaign contributors of Roxas when he ran for president in 2016, records from the Commission on Elections (Comelec) show.

The post was shared by a Facebook group that supports the late dictator Ferdinand Marcos. It has been re-shared more than 1,000 times. /ee