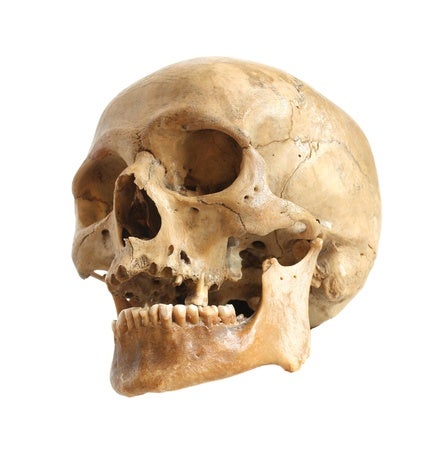 OAKLAND, Calif. (AP) — Police investigators on Monday were trying to determine whether a decaying human head found in an Oakland backyard belongs to a recently discovered headless corpse.

People visiting an Oakland apartment complex last week found the head in the grassless yard with a couple of trees and took it to a police station, Oakland Officer Johnna Watson said.

Officers at the police station initially thought it was a Halloween prank but then saw the head inside the car of the people who found it, Sgt. Michael Cardoza told reporters after the Friday discovery.

“I can say in my years of service, I’ve never had a human skull delivered to the police station,” Cardoza told KGO-TV.

Homicide detectives interviewed all the residents of the three-apartment building, and it didn’t appear they were involved, he said.

It’s unclear how long the head had been in the yard, but Cardoza said it was decomposed and “had a little bit of flesh on it.”

The Alameda County coroner’s office is working to identify the remains and determine whether it’s connected to a decapitated body found in “close proximity” in late September.

A resident interviewed by KTVU said he had no idea how the head got to an area of the backyard that tenants don’t frequent.

“They come into my house while I’m eating dinner — they come in and tell me something about a head. I don’t know nothing about no head,” Manul Adrow told the station about police. NVG