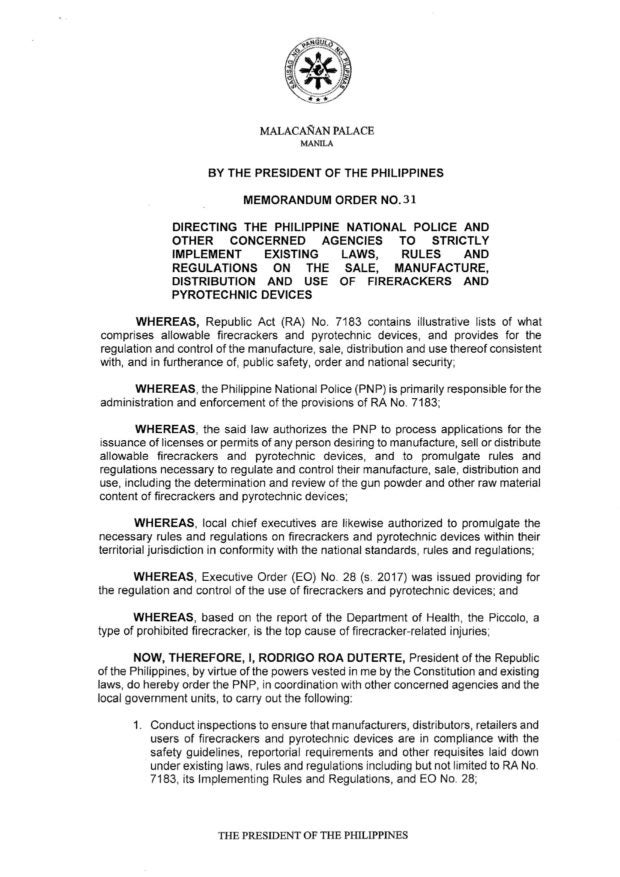 President Rodrigo Duterte has ordered the Philippine National Police (PNP) and concerned government agencies to stop issuing new permits and licenses for the manufacture, distribution, sale and use of firecrackers and pyrotechnic devices as he mandated the “strict” implementation of laws and regulations related to this.

Duterte issued the order through Memorandum Order No. 31 signed on October 29 but was released only to the media on Wednesday.

In his order, the President said the PNP and concerned agencies to conduct inspections “to ensure that manufacturers, distributors, retailers and users of firecrackers and pyrotechnic devices are in complaince with safety guidelines, reportorial requirements and other requisites laid down under exisiting laws.”

Duterte, who earlier said he wanted a law on total firecrackers ban in the country, said the PNP “is primarily responsible” for the implementation of Republic Act 7183 or the act regulating the sale, manufacture, distribution and use of firecrackers and other pyrotechnic devices.

In July 2017, Duterte signed Executive Order No. 28, regulating the use of firecrackers and other pyrotechnic devices.

In his new order, the President also ordered the police and other concerned agencies to “confiscate and destroy prohibited firecrackers and pyrotechnic devices as provided by law, rules and regulations, as well as firecrackers used outside community fireworks displays in violation of EO No. 28.”

He also ordered the cancelation, revocation and confiscation of the inventory or stock of those found in violation of existing laws, rules and regulations.

The police, he said, should also “strictly enforce the prohibition on the sale of firecrackers and pyrotechnic devices to anyone under 18 years of age.”

He said that any buyer of firecrackers or pyrotechnic devices who is suspected to be below 18 years of age but claims otherwise, should be required to show proof of his age.

He also ordered the strict enforcement of the prohibition on importing finished firecrackers and fireworks.

He also mandated the police and concerned agencies to “suspend the processing of new licenses and permits for the manufacture, sale, and distribution of firecrackers and pyrotechnic devices pending review of existing licensees’ and permittees’ compliance with laws, rules and regulations; provided that other permits necessary for the operations of such existing licenses and permits (e.g. permit to purchase/import ingredients, permit to transport) may continue to be issued unless such entities are found to have violated the relevant laws and issuances.”

“The suspension herein ordered shall remain in effect until declared lifted by the Office of the President upon recommendation of the PNP Chief and his submission of a report on the review undertaken on existing licenses and Permits.” Duterte said in his order.

He ordered all government agencies including Government-Owned and Controlled Corporations to “provide support and assistance required” to implement his order. /cbb