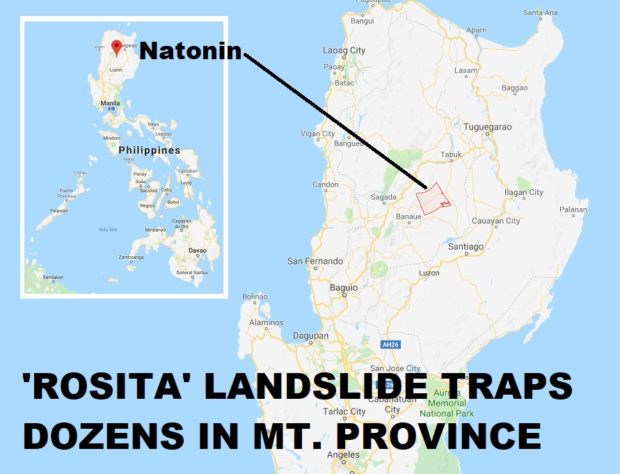 Nearly three dozen people were feared buried under a massive landslide unleashed Tuesday in the Mountain Province by Typhoon “Rosita” (international name “Yutu”), which killed four children and a man as it ripped across the disaster-prone nation.

The people trapped in the Cordillera mountain area of Natonin were buried when a wall of mud slammed into a building of the Department of Public Works and Highways, regional disaster management chief Ruben Carandang told AFP.

He said up to 31 people were believed inside the structure, but rescuers have not been able to reach the area because landslides have cut off roads.

Other reports give a lower number of 21 persons still trapped inside the building.

“It was not an evacuation center,” he added. “But some sought shelter there unfortunately.”

Search crews were just beginning to assess the damage wrought by the passage of Rosita, which made landfall early Tuesday with sustained winds of 150 kilometers per hour and gusts up to 210.

Authorities have already confirmed a father and three young children were killed in a landslide in Banaue, just south of the buried public works building.

Another landslide killed a 5-year-old girl in a neighboring province, police said.

“We see some branches on the roads and so on, but it is the flooding that is destroying houses here,” International Federation of the Red Cross spokeswoman Caroline Haga told AFP from Nueva Vizcaya province. “People are needing to be rescued.”

Nearly 10,000 people fled their homes ahead of Rosita’s arrival because they live in low-lying areas susceptible to flooding.

The high winds flattened flimsy homes, tore the roofs off others and downed power poles as well as trees.

Landslides spawned by the storm blocked a major road in the mountainous north, isolating some residents, a civil defense official said.

Still, Philippine disaster officials said the storm was less powerful than Ompong, which struck six weeks ago and left more than 100 dead. Most of the fatalities were due to a landslide in the mining area of Itogon.

The Philippines’ deadliest storm on record is Super Typhoon Haiyan, which left more than 7,350 people dead or missing across the central Philippines in November 2013. /cbb