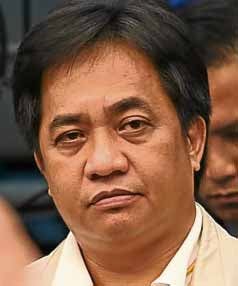 Former customs intelligence officer Jimmy Guban on Tuesday retracted his self-incriminating statements in earlier testimonies before the Senate and the House of Representatives about the smuggling of P11 billion worth of “shabu” (crystal meth) into the country with help from the Bureau of Customs (BOC), claiming he had been under pressure and in fear for his life.

Guban submitted an affidavit to the Senate blue ribbon committee partially contradicting his previous confession to his role in the smuggling of two huge shipments of shabu through Manila International Container Terminal (MICT).

He also walked back some of his incriminating remarks against a former police official, Eduardo Acierto, who he had said directed him to look for a consignee for four magnetic lifters that were used to conceal the shabu.

In his new version of events, Guban reiterated that he helped Acierto out on three occasions by locating a consignee for his shipment, which included kitchen tissues, clothes and four magnetic lifters, which allegedly contained the shabu at the center of the controversy.

He narrated in his affidavit how he facilitated Acierto’s request by handing over the importation documents to a certain Libay Dimayuga, leading to the successful delivery of the shipment to the warehouse, and payment of the customs brokers through him.

But Guban said he objected to Acierto’s fourth request to allow the release of a shipment to the consignee, Vecaba Trading.

He recalled telling the police officer that it would be under the same arrangement “provided it shall be properly declared,” as in the first three requests.

“Upon informing him this, he (Acierto) confided to me that the goods covered by the bill of lading under Vecaba Trading are actually illegal drugs, particularly shabu,” Guban said.

“Upon hearing this, I immediately said that it was not possible to do and declared to Acierto that we from the Bureau of Customs would cause the apprehension of these drugs as part of my duty as a government employee and as a Bureau of Customs officer,” he said.

Guban said Acierto, “upon seeing my sincere will and intention to have these drugs apprehended,” promised to help the authorities, later giving “staggered and piecemeal” information that led to the seizure of two magnetic lifters at MICT, which “exactly looked like the ones I helped him provide a consignee for.”

He cited as his reasons “lack of knowledge as to the nature of the investigation, stress brought about by it, fear for my personal safety and family, and my long confinement in detention.”

But Sen. Richard Gordon, chair of the Senate panel investigating the BOC scandal, made light of Guban’s retraction.

“Like he said, his word on Acierto is not enough to exculpate Acierto. In fact he inculpates Acierto by saying he was the one who brought in drugs. And he (Guban) is exculpating himself by saying he objected,” Gordon said.

“I think that is more lawyer initiated than Guban but nonetheless, that won’t fly,” Gordon said.

He also announced to reporters that Guban would be admitted to the Witness Protection Program (WPP) of the Department of Justice (DOJ), where the witness was to be transferred from Senate custody on Tuesday.

The same arrangement would be made for Deputy Collector Ma. Lourdes Mangaoang, who blew the whistle on the shabu smuggling.

Justice Secretary Menardo Guevarra confirmed later on Tuesday that the DOJ had taken custody of Guban and put him under WPP coverage.

Outgoing Customs Commissioner Isidro Lapeña did not appear at the Senate hearing.

“For me, his nonappearance here would add to the people’s doubts, though he has an excuse that he was summoned by the President for the change of command,” Gordon said.

He said it was up to Lapeña to convince the public that he was free of blame in the shabu smuggling.

President Duterte replaced Lapeña at the BOC last week amid the drug smuggling scandal and reassigned him as head of the Technical Education and Skills Development Authority. —With a report from Jerome Aning