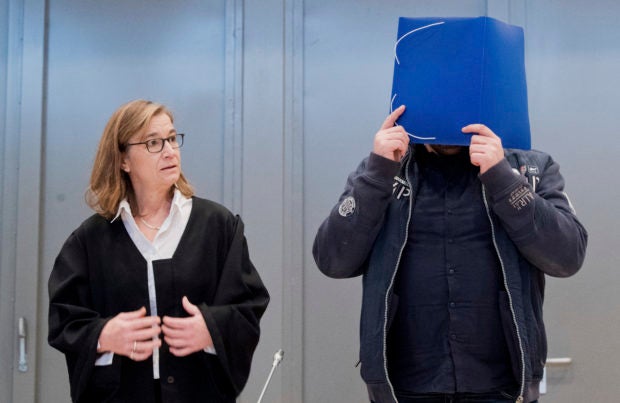 Defendant Niels Hoegel covers his face with a folder as he and his lawyer Ulrike Baumann, left, arrive at the temporay Oldenburg district court at the Weser Ems halls in Oldenburg, Germany, Tuesday, Oct. 30, 2018. The nurse serving a life sentence for two murders is going on trial on charges that he killed a further 100 patients at two hospitals in Germany. (Julian Stratenschulte/dpa via AP, Pool)

BERLIN — A former nurse accused of killing 100 patients at two hospitals in Germany over a decade ago told a court as his trial opened Tuesday that the charges against him are largely accurate.

Niels Hoegel, 41, is already serving a life sentence for murder. His trial in the northwestern city of Oldenburg began with a minute of silence for the patients.

Asked by presiding judge Sebastian Buehrmann whether the charges against him are largely true, Hoegel replied “yes,” news agency dpa reported. There are no formal pleas in the German legal system.

The murder charges stem from Hoegel’s time at a hospital in Oldenburg between 1999 and 2002 and at another hospital in nearby Delmenhorst from 2003 to 2005. The alleged victims were aged between 34 and 96.

Hoegel was convicted in 2015 of two murders and two attempted murders. He said then that he intentionally brought about cardiac crises in some 90 patients in Delmenhorst because he enjoyed the feeling of being able to resuscitate them. He later told investigators that he also killed patients in Oldenburg.

The Oldenburg state court is conducting the trial at a courtroom set up in a conference center, a venue chosen to accommodate a large number of co-plaintiffs and public interest in the proceedings.

Judge Buehrmann opened the proceedings by asking everyone present to stand for a minute of silence for the deceased patients.

“All of their relatives deserve that their memory be honored,” independently of whether or not Hoegel had anything to do with their deaths, Buehrmann said. “We will make every effort to seek the truth.”

He promised Hoegel a fair trial.

Hoegel told the court that he had a “protected” childhood, free of violence. He said his grandmother and his father, who were both nurses, had been his role models for going into the profession.

An additional conviction could affect Hoegel’s possibility of parole, but there are no consecutive sentences in Germany. In general, people serving life sentences are considered for parole after 15 years.

“We have fought for four years for this trial and expect Hoegel to be convicted of another 100 killings,” said Christian Marbach, a representative of the patients’ relatives. “The aim is for Hoegel to stay in custody as long as possible.”

The trial is scheduled to last until May.

Police have said that, if local health officials hadn’t hesitated in alerting authorities, Hoegel could have been stopped earlier.