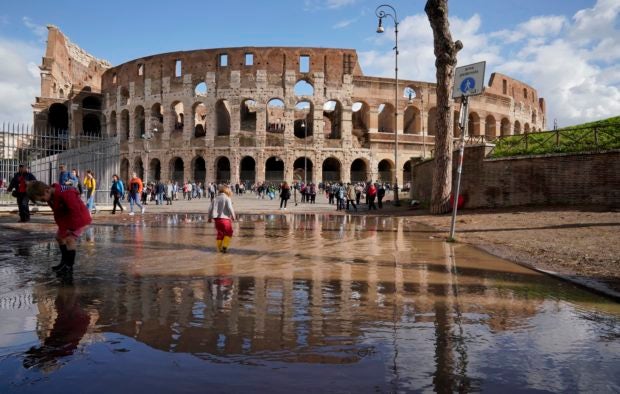 Children play in a puddle by the ancient Colosseum a day after strong winds and rain hit the city, in Rome, Tuesday, Oct. 30, 2018. The national Civil Protection Agency has issued red and orange alerts — meaning possible “loss of life” from landslides, floods, and infrastructural damage — due to an Atlantic storm system that has brought torrential rains and hail, electrical storms, powerful winds and high seas to Italy from North to South. (AP Photo/Andrew Medichini)

MILAN — At least nine people have been killed over two days in Italy as heavy rains and high winds buffet much of the country.

The news agency ANSA said Tuesday that the deaths included a woman who was buried by mud when a landslide invaded her home and a firefighter who was struck by a tree while responding to the emergency, both in the northern region of Trentino-Alto Adige. A man died while wind-surfing in Emilia-Romagna, when he was slammed against rocks. The other fatalities occurred in Naples, Liguria and Lazio.

High winds created an exceptional tide in Venice on Monday, covering three-quarters of the city for the first time in a decade. Water levels were forecast Tuesday at 110 centimeters (43.3 inches), flooding 12 percent of the famed lagoon city.  /kga